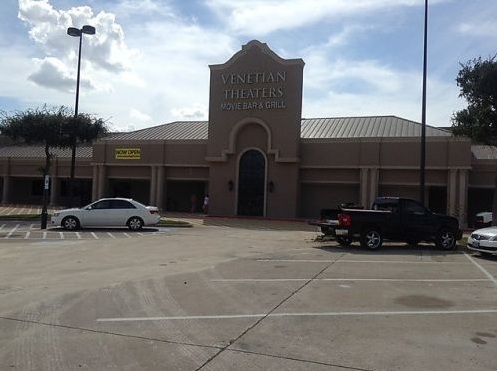 The Venetian Movie Bar & Grill opened on September 4, 2012 by Venetian Theaters. The four screen theatre featured a full food and bar menu plus the latest movies. The theatre was all digital along with 3D capabilities. It had closed May 8, 2016. It was taken over by new operators and reopened July 8, 2016 as the Wellborne Spotlight Cinema & Grill, but this was short lived and it closed later in 2016.

In April 2017 it reopened as Venetian Cinemas screening Bollywood movies, and occasional American movies. In 2018 it was renamed Fun Movie Grill. It was closed on March 16, 2020 due to the Covid-19 pandemic. Reopening May 15, 2020 it was closed again on October 31, 2020. In January 2021 it was announced the closure would be permanent.

Went by this theater last week at about 5:30 PM to check it out. And it was closed. No signage or anything.

It’s quite clear to me what this theaters problem was. Nobody new it was there. I’m a long time theater guy and this location was just about four miles from my house. And I didn’t know it was there. I only found it when I was going to a computer/networking store the next block over. I saw it’s dinky little sign and thought it was just a small little community arts theater. I went by again last week and decided to check it out and it was closed. I learned a long time ago. The customers won’t come if they don’t know you’re there.

When Albertson’s grocery chain closed the majority of its locations in the Dallas/Fort Worth area, it was theater-goers who benefited as two closed Albertson’s were transformed into cinemas. The Studio Movie Grill: Royal in Dallas was the first and this location, the Venetian Movie Bar & Grill, was the second. The quirky theatre was a nice rebirth of movie going in Carrollton which once had multiple, multi-screen operations but had been left theatre-less for ten years since 2002.

The Venetian launched on September 4, 2012 and it initally drew on weekends but aged quickly with theatre chairs not up to the task. Further, off-putting elements including not having features on the phone, a subpar location sandwiched within a nondescript shopping strip, and a website that was often down would quickly catch-up to the indy theater. It closed for a brief period.

Ciné America came in to operate the theatre to prevent a death spiral. A changed menu with higher prices rankled what was left of its core patrons. C-A was likely considering transforming it to a Hispanic-based operation as it operated the theatre in Fort Worth’s La Gran Plaza. The circuit gave independent films and four-wallers a shot in the Venetian’s final days giving DFW-area exclusive presentations of a handful of features. But on May 8, 2016 – shy of its fourth anniversary – the theatre was mercifully closed.

But a new operator was identified hoping to reverse the fortunes. Andrew Thomas' second location of a Wellborne Spotlight Cinema and Grill (Alvin, TX being the other) came in to operate as of the July 4th weekend, 2016 with a soft launch of repertory/recent films and its full launch with new films on July 8, 2016. After trying Groupon incentives to get more foot traffic, the location closed after four months.

In April of 2017, it reopened as a Bollywood venue known as the Venetian Cinemas with occasional American movie hits. Final operators, the Fun Movie Grill added the Carrollton location to its Richardson and shared-lease location with Regal Cinemas in Irving. It relaunched as the Fun Movie Grill Carrollton on September 19, 2018 with a launch party. Fun would then take over the entire Macarthur Marketplace when Regal left in May/June of 2019.

The Fun locations all closed after screenings on March 16, 2020 due to the COVID-19 pandemic along with many other theaters. Fun Carrollton was one of the first four hardtop theatres to relaunch in the DFW area on May 15, 2020 along with its Fun Macarthur Marketplace Irving, iPic Fairview and America Cinemas in Fort Worth. The Fun Carrollton closed again October 31, 2020 temporarily but then was announced as a permanent closure in January of 2021. With five operators in less than ten years of business, the location did not appear to be a fun venture.