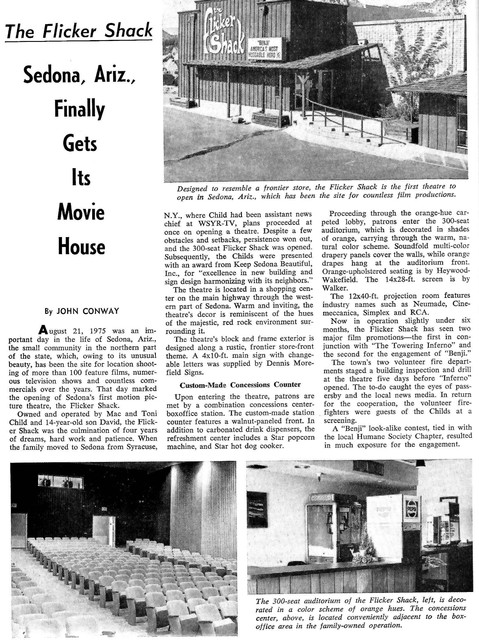 Opened on August 21, 1975, the rustic style, 300-seat Flicker Shack was Sedona’s first movie theater, though by that time the town and surrounding countryside had been used as the location for more than a hundred movie productions. Boxoffice featured an illustrated article about the Flicker Shack in its issue of February 16, 1976.

I visited Sedona in the Summer of 2008. Mentioning the amount of movies that had been filmed in the area reminds me of my encounter with the “Sedona Movie Museum”. I stopped in hoping to learn something but the young guy that approached me as a staff member quickly turned out to be an aggressive time share salesman. He wouldn’t let me steer the “conversation” back to filmmaking history so I walked out in mid sales pitch, with the photocopy of the list of the films made in the area that he first handed me. I would have liked to have spent some time with the photos and items in the museum but I dared not return. Comments on the museum’s Trip Advisor page say it was still like this as of 2015.

That Flicker Shack looks cool btw. :) Wish it was still there when I was.

In Google Street View the Olde Sedona Bar & Grill has a sign that to me resembles the marquee in the Boxoffice article but I otherwise can’t tell if it’s the same building.

Olde Sedona Bar & Grill is at 1405 AZ Hy 89. 1420 is now the location of a Whole Foods Market, and it looks like fairly new construction. I’m pretty sure that the Flicker Shack’s building has been demolished.