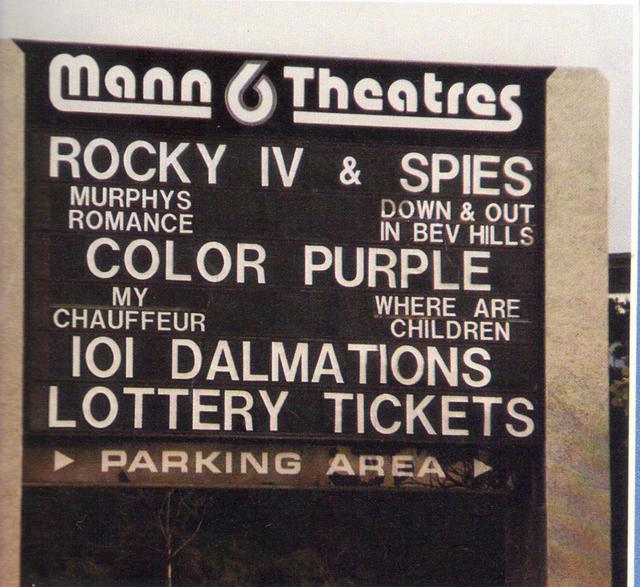 This was THE theater to hangout at if you lived in nearby communities of Paradise Hills, Bonita, National City or Chula Vista.

Who would have thought that this theater would join the dinosaur? I remember standing in lines to see the hits of the of the ‘80s whether they were “B” grade (Chuck Norris flicks come to mind) or serious well-crafted, “big budget” films (like “Indiana Jones and the Temple of Doom”).

The first movie I saw there was Clint Eastwood’s “Firefox” (1983) and the last one I saw there was “Star Trek: Insurrection” (1998). I left the San Diego area shortly after the seeing the latter. And when I came back to visit (yeah I no longer live in S.D.) a year and a half later, I was surprised to see Mann PB 6 gone.

Then again, I kind of noticed the last years of Mann Theaters' operation in Plaza Bonita, the blockbuster lines seemed to have disappeared.

Mann Plaza Bonita 6 was great in its prime. Now it is but a memory.

Those 2 pics bring back memories. The first movie I saw at this theatre was Transformers:The Movie back in summer 1986. I also saw Batman 89 (there was a line outside the box-office), Ghostbusters 2 (saw it on a Sunday afternoon w/dad in an empty theatre), Gremlins 2 and Halloween 5. When the first ninja turtles movie came out in 1990, I remember scratching my head wondering g why they didn’t get the movie at this theatre, therefore we ended up watching it at the Grove off of college station.