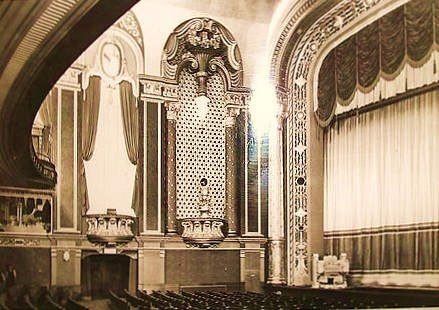 Originally intended to be a sister theatre to the Gaumont State Theatre, Kilburn, London (England’s largest purpose built cinema with 4,004 seats), the 3,006 seat Holloway Gaumont was again like Kilburn a promotion of Hyams & Gale who sold out to Gaumont British Theatres as the building was being completed. The Gaumont Theatre opened on 5th September 1938 with Dorothy Lamour in “The Hurricane”.

It was designed by noted American theatre architect Charles Howard Crane, who had come to London from his Detroit, Ohio base during the Depression, during which time he also designed the Granada Theatre, Greenwich in south London (1937), the Granada Theatre, Slough, Buckinghamshire (1938) and the Earls Court Exhibition Centre in the west London suburb of that name (1937). The Gaumont Theatre has a massive street frontage corner façade, and originally had a 220 seat restaurant located above the entrance (with out-door loggia terrace seating on the Holloway Road side) and a broadcasting studio in the top of the square tower. The foyers and auditorium were in an Italian Renaissance style (the Gaumont State, Kilburn (architect George Coles) was in a French Renaissance style). The side-walls of the rear stalls seating area under the balcony had 10-panels containing painted landscapes. The Gaumont was equipped with a Wurlitzer 3Manual/12Rank theatre organ with its console on a revolving lift, it was opened by organist Terrance Casey. The stage was 54ft wide and 30ft deep. The orchestra pit floor could be raised to stage level creating a 50ft deep stage. There were several dressing rooms, two rehearsal rooms, a private room for the organist and a fire-proof music room. There was a large car park and in the basement was a huge waiting room which could accommodate 3,000 persons.

The inside of the beautiful auditorium was destroyed by a V1 Rocket bomb on 8th November 1944, although the main exterior walls survived as did the foyers. It wasn’t until post war building regulations were lifted that reconstruction could take place and a new auditorium in sleek modern lines (architects T.P. Bennett & Sons) graced the Gaumont when it re-opened on 21st July 1958 with Clark Gable in “Run Silent, Run Deep”.

It was re-named Odeon in November 1962 and triple screened in 1973. Since then it has been further sub-divided into eight screens, with only the outer walls and the foyers remaining in anything like their original 1938 condition. Seating capacities in the auditoriums in 2008 are; 330, 315, 72, 239, 191, 253, 94 and 105. It remains in operation as a successful first-run general release theatre in this district of North London.

To celebrate the theatre’s 65th anniversary in 2003, a new metal flag-pole was erected on top of the tower, replacing the original, by now rotting wooden one. A new Odeon corporate flag was especially made to fly on the mast. In November 2010, the Odeon Holloway became the first of the Odeon cinemas in the U.K. to be equipped as an all digital theatre in all its auditoriums.

In late-2019 work began to convert into a Luxe cinema. The cinema remained open during this transformation, closing screens one by one as the refurbishment continued. It was fully closed in March-2020 due to the Covid-19 pandemic. The former restaurant over the entrance which had been converted into screen 3, has now been opened up and is in use as a lounge area, overlooking the main foyer. Art Deco style light fittings in the main foyer have been installed, but may not be the original ones. The Odeon Luxe was fully re-opened in late-August 2020 screening “Tenet” in screens 1, 2, 3, 4, 5, 7. Screen 6 played various films. Seating capacities in the screens, which are all equipped with recliner seats are: 107, 99, 69, 56, 80, 41 & 33.

The façade and the foyers are Grade II Listed parts of the building.

A set of vintage photographs of the Gaumont, now Odeon Holloway:
View link

Vintage photographs of the Gaumont, and its Wurlitzer organ console:
http://www.ukwurlitzer.co.cc/2228.html

this Wurlitzer had a Tibia Plena rank instead of the normal Tibia Clausa.The only Wurlitzer in GB with a similair Tibia is the Wurlitzer in the Opera house Blackpool

Actually the Wurlitzer had a rare Tibia Plena as well as a Tibia Clausa.Apparently the whole organ survived the bombing and was stored at the Odeon Shepherds Bush.But obviously by the late 1950`s they no longer wanted the bother of reinstalling the organ when the auditorium was rebuilt.The organ was then dispersed with some parts used on the Tower Blackpool Wurlitzer and the fire there.

Apparently Odeon have submitted plans to Islington council to refurbish the cinema.

Screen 3 will be abolished to make room for an enlarged foyer and the vacant shops on the side of the cinema will be redeveloped as restaurants linked to the cinema foyer.

The article below from the ‘Islington Tribune’ explains further. http://islingtontribune.com/article/restaurant-will-star-at-revamped-holloway-road-odeon

I do not know if the plans have been approved or when work will commence.

Presumable the cinema will be refurbished to ‘Odeon Luxe’ standards.

See the link to “RELATED DOCUMENTS” at the bottom of the page.

The works are outlined in the “HERITAGE STATEMENT” document.

The document titled “Dwg OD-HW-145-PLN – Proposed Section” provides a good illustration of the new stepping and seating, clearly showing recliners in Auditorium 2 and 4—the plans show recliners in all auditoria.

According to the “HERITAGE STATEMENT” document, Odeon are planning on making this a “flagship” site, combining heritage aspects with the (non-listed) auditoria fully refurbished to current standards, clearly implying it will be a “LUXE”-branded site.

The application was approved.

Addendum: There is a further “listed building application” that should be referenced instead.

Most changes are relatively minor; some details of particular note:

(N.B. I have not summarised any proposed external changes, e.g. new signage.)

The document titled “Officer Report & Associated Documents Final Report,” dated 25th June 2019, recommends approval. The planning database states that this revised scheme has been approved, but no approval document is included at this time.

the refurb has started the foyer is closed

This cinema has been upgraded to a Luxe. The foyer has been redecorated in it’s original colour scheme and the 1930s light fittings have been reinstated. The mini Cinema in the former restaurant area has been removed and is now a welcoming lounge space. The remaining seven screens have all been fully refurbished and the exterior of the building is much improved. Currently showing Tenet in most screens.