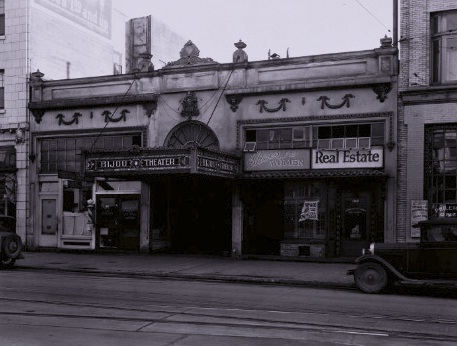 The Bijou Theater was opened on April 29, 1908. By 1941 it was operated by Warner Bros. Circuit Management Ltd. They were still operating it in 1950 as the New Bijou Theater.

The Bijou Theatre is owned by the Aberdeen post of the Veterans of Foreign Wars. The auditorium itself has not been in use since May, 2012, when the rafters were found to be damaged. The organization plans to repair the structure, replacing the rafters with engineered trusses, according to this recent article in The Daily World. The article notes that the Bijou was built in 1908.

The Bijou Theatre was listed in the 1913-1914 edition of Cahn’s guide. It was a ground floor house with 766 seats, playing vaudeville, stock, and musical comedy.

The New Bijou Theatre advertised its opening that night in the April 29, 1908 issue of the Aberdeen Herald. The admission price was ten cents.