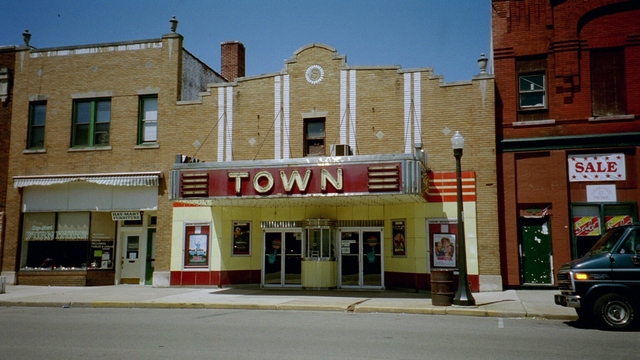 The site in 1920 was occupied by Daniel Kelly’s three story opera house, the only three story building in the city and the location of Kelly’s brother’s department store. In December 1922, a fire starting in an adjoining building also owned by Kelly, spread to the opera house, destroying it. The the site sat until 1926, when Elmer Sturm purchased the site and built the buildings which exist today. Sturm intended to open January 1, 1927, but fell from scaffold while working on the building in November 1926 and suffered a broken vertebrae. He opened the Sunset Theatre in the first quarter of 1927. He hired a man to run the theatre in competition with the Majestic Theatre across the street. The Majestic Theatre was the second theatre in the city, and was built by the Masons Lodge in 1910.

The two men who had brought the first movie house to Chillicothe in 1908, named it the Orpheum Theatre, and located it on the NW corner of Second Street & Walnut Street, across from City Hall. They paid a $500 licence fee. The two men ran two theatres in Peoria, Illinois at that time, called Orpheum Theatre and Majestic Theatre. In 1910, one of the men leased the building built by the Mason’s George Washington Lodge #122 as a future lodge. The Mason’s built the building as a theatre, with the intention of putting the lodge on the second story, but actually built two apartments there. They are still in use today. The Majestic Theatre operated there from 1910 until the owner, Mrs Warren, changed the name to Palace Theatre in 1928. Sh sold out to two local men, Frank Rolan & Frank Coon, in 1929. The Sunset Theatre owner Elmer Sturm entered a business arrangement with Rolan & Coon, creating the Chillicothe Movie Company which allowed the structures to be individually owned, but the movie business shared. Coon became the actual operating manager of both theatres. The joint venture had a five year contract time beginning in 1930.

Soon after forming the company, Sturm sold his movie business interest to Burt Potter, a local businessman. Potter held the interest until it expired in 1935., sold out, and went to live in the nearby village of Edelstein, Illinois, where he built a large building that became a famous dance hall called ‘The Hub’. The Palace Theatre was purchased by Kerasotes Brothers in the early-1940’s. In 1946, Kerasotes also bought the Sunset Theatre and operated both theatres for several years, before closing the Palace Theatre.

In 1949, a concession stand fire closed the Sunset Theatre, and Kerasotes Brothers then completely remodeled the building putting on a Streamline Moderne style front which remains today. The remodel of the 442-seat theatre was carried out to the plans of architect Axel J. Claesson of Morris, IL. It was given a yellow Vitrolite-faced exterior, and distinctive streamline canopy marquee, which is ablaze with pink and gold neon at night. It was renamed Town Theatre through a postcard entry competition which was won by Flossie Harvey, a young Chillicothe girl, who won a year’s free pass to the theatre.

A second fire in the concession stand in 1982, again closed the Town Theatre. Kerasotes added to the rear of the building and twinned it. Kerasotes later sold the theatre to Verne Reynolds. The large auditorium holds 150 seats and the second auditorium holds 98 seats. The Chillicothe Optimist Club bought the Town Theatre from Verne Reynolds in November 2009. The Optimist Club generates profits it shares with qualified youth groups who collect tickets to earn money through a profit sharing agreement. In late-2011, twenty four area youth organizations are participating in the profit share. In the first year, the Optimist Town Theatre returned just over $10,000 to fourteen youth organizations, with expectations for this to rise in future years.

The Optimist Club Theatre Company is starting a campaign to raise funds to convert to digital projection, currently proposed at $136,500 for both auditoriums.

The Town Theatre is one of several Art Deco and Art Moderne Illinois movie houses featured in the 2001 book “Popcorn Palaces” a collection of the paintings of Davis Cone.

Very cool that it still has the original marquee it looks like.

This theater is being purchased by the local Optimist Club; details in this article: View link

This house is now billed both on its own web site and on various movie listing sites as the Optimist Town Theatre. The name on the marquee has not been changed, but there is a decorative piece on the facade above the marquee bearing the Optimist International logo.