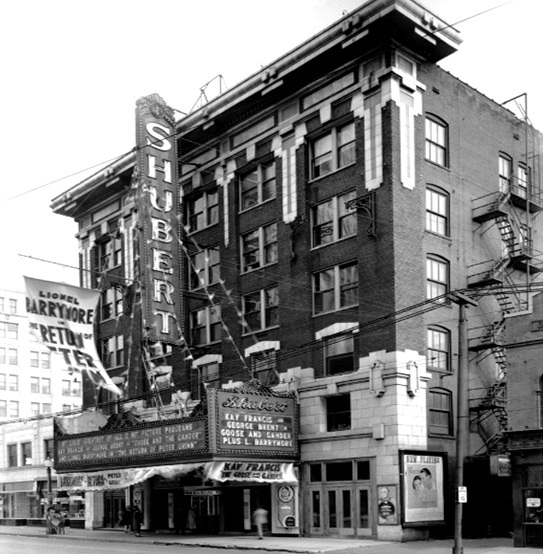 The Princess Theatre, at the corner of N. Grand Avenue and Olive Street, was opened September 12, 1910. This building must have suffered identity crises because it changed its name about every decade. From September 1916 to April 1917 it was renamed Players Theatre after the stock company which performed there. It was then closed and the second balcony was removed.

It had undergone extensive remodeling, $150,000 worth. Some may have not recognized the palace because it had new everything, seats, seating arrangements, lighting, orchestra pit, carpeting, dressing rooms, draperies, lounges, furniture, painting and scenery lofts.

The terazzo floor and facade were marble while the paneled lobby had murals by artist John Sherman. Although the theatre had a striking appearance, it was not well attended. One critic said it was caused by the new and unusual wave of off beat drama. Audiences didn’t like it.

So the American Theatre once again changed its format to Broadway musicals. The playhouse remained at this location for seven years before moving back downtown to the old Loew’s Orpheum Theatre.

In 1960, when the American Theatre moved out, the building became known as the Loew’s Mid-City Theatre after the swap with the Orpheum Theatre downtown. This gave Loew’s on North Grand along with the other big movie palaces along the Grand White Way. The Loew’s was a movie house and replaced the once lively stage with a silver screen.

The Loew’s Mid-City Theatre didn’t last long in St. Louis. Eventually it had to close. Later as the Campus Theatre and Sun Mid-City Theatre, the theatre was also unsuccessful and eventually was razed.

After several attempts to find tenants, the owners decided to raze the theatre in December 1978 due to property taxes and little to no chance of leasing the building. Saddly, if they could have held on for a few more years, this situation could have turned around!!

This page from the Landmarks Association of St. Louis has a brief biography of architect Harry G. Clymer who, with partner Francis Drischler, designed the Princess Theatre. At the bottom of the page is a longitudinal section of the theater. The page notes that Clymer & Drischler also designed the Shubert Theatre in Denver.

Another name to be added to the list: theatre was known as the PLAYERS from September 1916 to April 1917. Renamed for the Players stock company which was based there. In April 1917 the theatre was closed and was effectively rebuilt (from two balconies to one) and reopened in March 1919 as the Rialto.