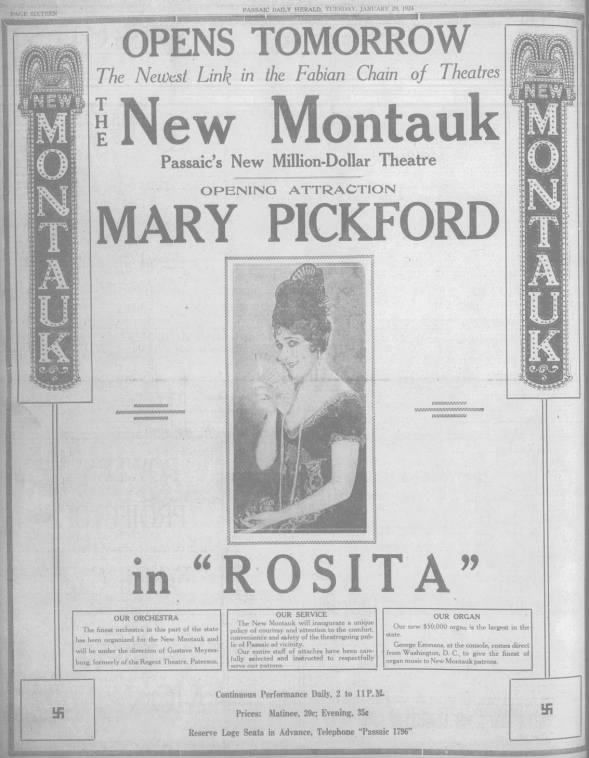 Starting in the mid-1950’s, science-fiction double features were popular at all of the Passaic theaters. In fact, they were popular all over the country.

An older cousin said he attended science fiction double features at the Montauk. Was he pulling my leg?

My mom and dad had their wedding reception in the Ritz Ballroom in 1935, and I remember going to the Montauk for the Saturday kids matinees in the 50’s & 60’s.

So, now that the theatre and flea-bag hotel are gone, I’m sure the neighborhood is a much safer and pleasant place to be for the junkies, dealers, gang-bangers and school children of Passaic. What these pathetic small-minded city officials should have done was restore the theatre as a performing arts center and bulldoze the rest of the town.

I decided to swing by the Montauk this morning while the crew was there. I met a worker at the entrance gate and had an interesting conversation.

He told me that everything of value (light fixtures, marble, stained glass, etc) was taken by “The State” before demolition began. The crew working now has salvage rights to anything left in the building and that’s why they’re stripping anything and everything that can be sold. I asked who I should contact about buying a light fixture. He said to call the governors office.

I then asked what was to happen to the name on the marquee. He said that somebody already asked about that and anything of value would be removed before getting destroyed.

Here’s where it gets weird. I showed him the article about the organ and he said it was against the back wall on the stage! He said they ripped anything of value out of it and the rest got smashed when the back wall was demolished.

The piano in the pit was still there too and that was pounded to rubble when the roof came down.

At one point, he said all the chandeliers were removed and then later said they were all smashed when the roof went down.

I wonder which story is accurate?

Here’s a blog post and some photographs taken during the demolition.

Isnt there always something shady in these deals???

The city demanded the theater be torn down?

Something VERY shady about that!

I took these pix yesterday … I don’t know how far this demolition is going but clearly the theater is gone … maybe the Hotel will be saved? Who knows? Well, I hope you enjoy these pictures … I did not know that a Droid camera was this good!

I also mentioned above, that the State agency in charge of building the school had the option of adaptive use for the theater (a community and school theater, a place to hold the HS graduation, etc) but the city demanded it torn down. Probably no amount of campaigning could have saved it.

You could see the original ceiling through holes in the drop ceiling and some of the original windows, which I believe were covered over from the exterior. It was so filled with garbage, you would’ve thought you were in a landfill. That place was horrid and smelled awful… the hotel that is, not the theater. Perhaps my weekend project will to be adding those pictures to the other album.

I recently read a comment on-line from a “long time resident of Passaic.” They said the theater was the site of prostitution and other sexual activities, therefore it is an “eyesore and should be torn down.” That’s the kind of mentality you’re facing and it would have made a grassroots campaign to save it VERY difficult. And need I mention the corruption in the cities politics? I believe the last mayor (maybe the one who signed off on the demolition) was brought up on some charges.

I don’t imagine much was left of the Ritz Ballroom after its conversion to a disco?

I was able to go into the Hotel Lincoln, aka Passaic Hotel and got a few pictures in the Ballroom there as well. I can add them to my photobucket album if anyone is interested. Honestly, those pictures are not impressive and that place was pretty creepy and disgusting, so I didn’t add them originally.

Here’s a better scan of the Hotel Lincoln postcard:

I would bet the chandeliers hadn’t been lowered for cleaning or re-lamping in 50+ years. They would have had to go up in the catwalks and loosen the rigging to bring them down.

Bob, as far as I know most of the interior details were salvaged. Some are possessed by Passaic, and others have probably been scraped and/or sold by the demo company for extra money. I’m not sure what went where or to who exactly. I am no longer involved with the State so my knowledge of the going-ons are very limited. It’s unfortunate that the pictures I took of the chandeliers don’t show the scale of them. They were huge and quite impressive.

Are there any traces of the organ’s Echo Chamber in that photo posted by Jeff yesterday at 5:25? If it was above the projection booth, it’s gone.

Mikeymike: glad to share the clippings, wish they were better quality. Do you know if the chandeliers were salvaged? There’s a similar theater in Suffern, New York that could use them.

It’s strange. If the people who complained about the demise of so many theaters had gone more often, maybe the theaters would still be around.

Bob, thank you for posting the newspaper clippings. I especially love the “Old Montauk” picture. Thank you so much!!!!

Im sorry my above comment was supposed to be directed towards LuisV. This is why one should never do these things when half asleep. Sorry.

Bob, my comment above was not in any way to disrespect the Roxy in New York. Yes that was a theatre like no other, except maybe Radio City. My point was, if you look at the interior shots of the Montauk (and others that passed before it), you see marble columns, wood trim, stained glass, brick and mortar, etc. You go into any of these so-called modern multiplexes today, and its all sheetrock and half the walls have holes in them. This, like others was a palace. And a question someone asked me yesterday was, WHY couldnt they have incorporated the theatre, or at least the auditorium into the new school?? You always need a place for assemblies, school plays etc.