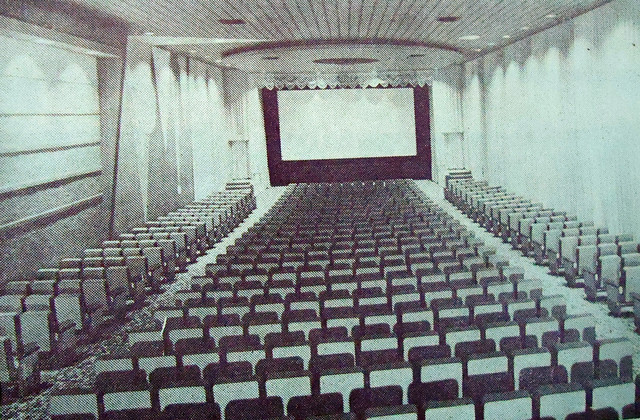 Originally a restaurant which opened in 1933 as Henry’s Restaurant and in March 1934 it was Perry’s Brass Rail. In late-1936 it became the Weiss Cafe. It was converted to the plans of architect S. Charles Lee into the Admiral Theatre which opened on May 16, 1940 with Danielle Darrieux & John Loder in “His Majesty’s Mistress” & H.B. Warner in “Torpedoed”. In the 1960’s it was known as Rector’s Admiral Theatre. In 1969 following a remodel, it was renamed Vine Theatre and the venerable movie house showed second-run movies at a bargain price. After seventy years, though, the Vine Theatre ended its daily movie programming in October 2007.

The theatre then was used for church services, private screenings, and location shooting. In 2009, it became a Lazerium, which closed in December 2009. The Vine Theatre was then used for special events, for hire and occasional movies.

In May 2015 it reopened as a Dolby showcase theatre and now operates as a private (for hire) movies theatre.

I think Dolby has put in a demo of their new Dolby Cinema Vision® Theatre inside the old Vine Theatre. How long the demo will last for theatre owners to check out is hard to find out. Maybe It will show movies again, B movies for the tourist crowd.

I ask again – whoever posted the venue’s status as “open” please back this up with evidence. I NEVER see this theatre open – and I am on the blvd a lot.

This theatre is open, just not to the public. Dolby owns it, and it was first prototype for Dolby Cinema auditoriums that you now can see popping up in AMC Theatres. It’s since been maintained as a private screening room that they open up for rentals for private screenings, events, and filmmakers who use it to see how their films play in Dolby Cinema. I’ve been here a few times for some media screenings. (In fact, a press screening for the 25th anniversary of SCHINDLER’S LIST was held here this past Thursday, November 15.) It’s kind of smart of them to let it be incognito from the street traffic viewpoint since it’s now a private venue.

Shorpy link with an August 1963 photo. Click “View full size” for added detail. Appears to say Rector or Rector’s above Admiral on the marquee.

Here is what appears to be the official website.

May 16th, 1940 grand opening ad as Admiral in the photo section.

1956 photo in below link. Which sounds like a great event as well.

The last movie I saw there was on 9/11/01. After watching news coverage of the Twin Towers being destroyed all day, I needed to get out. I went to the Vine to see Spielberg and Kubrick’s A.I. I walked in to see New York destroyed in the movie, too. (Since I was early the previous showing was still going.)