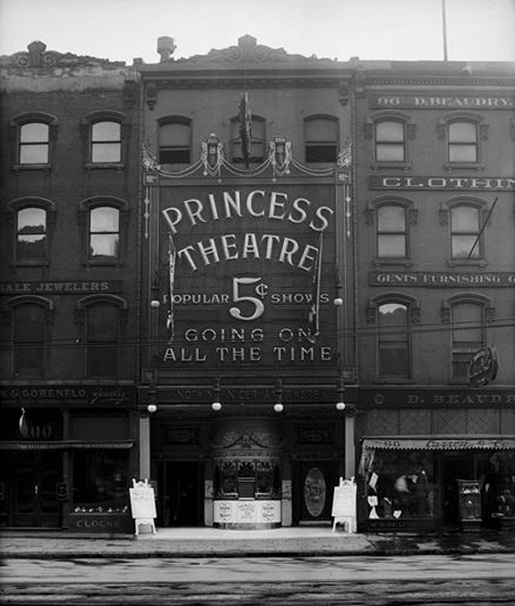 This early Detroit nickelodeon was open in 1908 and closed in 1922. It has since been demolished.

Any additional information on the Princess Theatre would be appreciated.

The Princess Theatre got a paragraph in an article about Detroit’s movie theaters that appeared in the July 15, 1916, issue of The Moving Picture World:

“And just a few more words about the Princess theater, on Woodward avenue, between Congress and Larned streets.

“It is now operated by the Princess Amusement Company, of which J. E. Thomas is president. The theater is in charge of L. A. Chapeton, who formerly was operator at the same house. The Princess was erected in about 1907 and was the first strictly motion picture theater in the city—that is showing pictures exclusively, both the Casino and Bijou showing pictures and a little vaudeville. The Princess seats 316 and the original embellishments are still there, although each year or two they are done over. The Princess was the first house to put in Universal service, and it has been a Universal patron continuously ever since the beginning.”Earlier in the article, it is noted that the Princess Theatre was originally operated by Mitchell Mark.