Please update, OPEN, Showcase Cinemas just reopened the complex. It was the last NYC Metro Area theatre to open by the chain.

Did they close permanently? They had upgraded to recliners so am wondering if the closure is temporary even though it dropped from their website. Will ask next time I go to their other theaters. 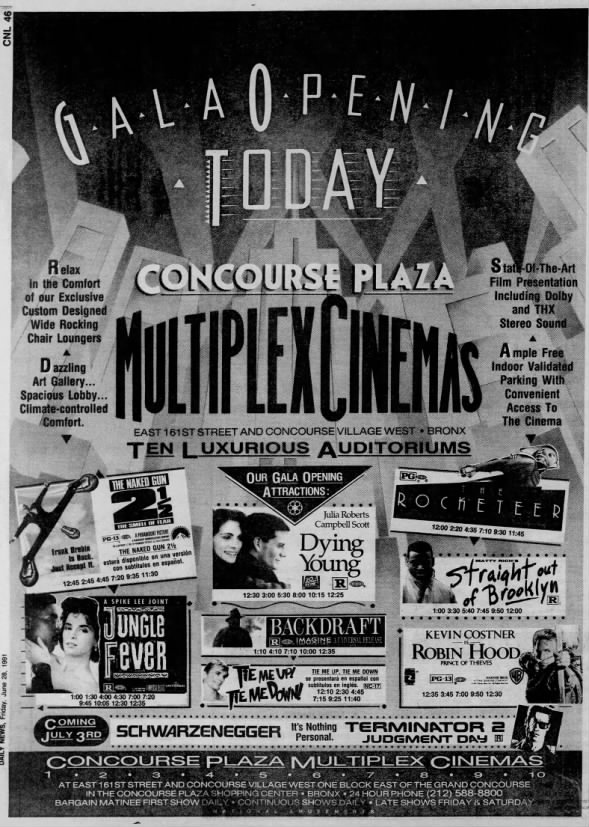 PS to the above: www.bronxpoint.nyc Then scroll down and click on the word Development and it mentions a state of the art theater as part of this project. The sign for Cinema also appears in one rendering.

Correction to the above: They did not renovate with recliners as was done with White Plains , Cross County and College Point. So am speculating they are not upgrading this theater as they may be the theater chain coming to the nearby Bronx Point mixed use project at the southbound Deegan @ the waterfront next to the 145th Street bridge…

It is possible that the water pipe issue is taking long since maybe the landlord has to pay for it. Regardless, glad that they woke up and are renovating here with recliners. They lost too much patronage to AMC Bay Plaza and Magic Johnson, Harlem. Last time I saw a film here, the screen was way too dark. You seriously have to wonder if the manager or even district manager ever take a peek in their auditoriums…

I hope they take this opportunity modernized the theater with recliners,new concession stand

That water pipe issue is taking too long to resolve.

They are renovating it next month with recliners and they are closed right now due to a water pipe issues…they should have renovated long, long, ago and have finally waken up as they did with Cross County, Yonkers, NY which is slowly gaining popularity with it’s recliners and free parking. Validated parking at Ridge Hill is still $4.00 !!!

Glad you enjoyed it. Last time I visited, one of the auditoriums smelled and as with the other theaters in this chain, cannot help wondering why it has not been upgraded. Heard that many area patrons either flock to AMC Bay Plaza, or Magic Johnson’s Harlem cinema…

This theater and it’s shopping center are temporarily closed due to the outbreak of Legionnaires disease. But when it re opens, will the public continue to patronize it after all the Legionnaire issues ???

Having worked for National Amusements as a projectionist for 20 years, its sad to see this company as a shell of its former self.

To the above, agree with you 1000%. Hopefully the rumor of AMC going into the Whitestone Cinema property as part of the Paragon Outlet mall are true, BUT there is no activity there and the project is not listed on Paragon’s website. The area next to the Deegan southbound where two separate retail projects emerged would have been an excellent theater location…

I hope not. The Bronx is clearly in need of a third and, possibly, fourth movie house. The question is…which location is best suited for it.

This theater, too, shall pass, leaving only one in the Bronx.

About half the auditoriums have new seats — not as comfortable as the old leather seats that rocked back (which the remaining auditoriums still have). They say the plaza is being renovated, but it looks like a disaster area — food court is all boarded up, only two or three active shops. You’ve got to give the theater credit for trying, though.

Currently the plaza is under construction – I had caught a flick here the other day. Its a perfectly utilitarian National Amusements design complete with corrugated steel walls. It appears seating ranged from 190 to 480 – I was lucky enough to be in #5 -the largest theater in the house. The layout of the mall is uninviting and looks as if it was designed to accommodate lots of crowds (and potentially problems). The walk up to the theater looks like a prison, the theater is 2 floors underground). The theater itself has a central concession stand (it looks newish) and the 10 theaters flank the stand along with two sets of restrooms. Overall the experience was – well – an interesting one, I can’t say I’ll be back but the theater was clean (even if the auditorium I was in smelled a little like a hospital), but they left the Real D polarizers on a 2D presentation – ugh – I wish they would make projectors that would refuse to start up if a 3D polarizer was left on for a 2D movie.