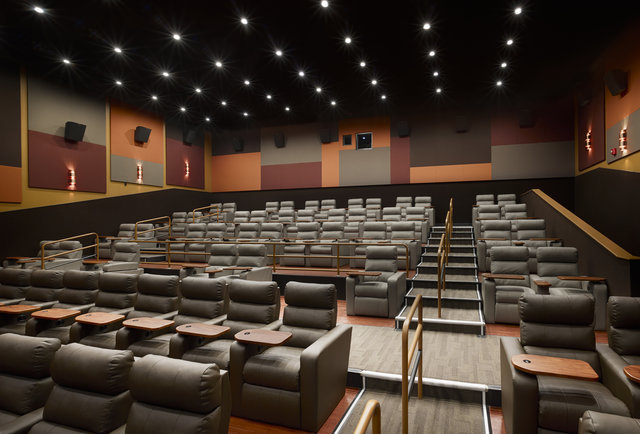 Having opened in June 11, 2013 within the new The Street retail development in the Chestnut Hill section of Newton, this theatre is the first in Showcase Cinemas' concept of SuperLux theatres.

Seating is provided on either a SuperLux (as of this writing, $28 per ticket) or a LuxLite ($20) level. Popcorn and soda are offered, as well as cuisine (meals, appetizers and a full bar menu) by the on-site location of Boston-area restaurant Davio’s Cucina. In addition, there is a SuperLux Lounge for pre-film drinks and appetizers, as well as full concierge services.

This article about The Street in the New England Real Estate Journal says that the Cambridge architectural firm Prellwitz Chilinski Associates (PCA) designed the reconstruction of the old Chestnut Hill Shopping Center into The Street. PCA also designed the Legacy Center, site of one of National Amusement’s earlier multiplexes.

The interiors of the Showcase SuperLux itself are the work of the British firm Julian Taylor Design Associates, with offices in the market town of Romsey, Hampshire, England. Their web site features a slide show with nine photos of the project.

I’ve been unable to find much about Stotser & Associates on the Internet. They have no web site of their own that I can find, and the business web sites that have pages for the firm give very little information about them. They are an architectural or architectural engineering firm headquartered in Columbus, Georgia, and have the aka R S E International, presumably an acronym for partners Ron Stotser and Sia Etemadi. The firm was established in 1993 and all the business sites agree it is rather small, though more recent postings show higher revenues and more personnel than earlier postings so it must be growing rapidly.

I have found a few construction related web sites that list Stotser & Associates as architects of various multiplex theaters, especially for the Rave Cinema chain (page at Continental Building Systems), but construction companies often deal only with supervising architects, who are not necessarily the actual designers of the projects they oversee.

Still, I don’t see why a small firm in Georgia would be supervising construction of a large project in Massachusetts, or other distant locations that have had projects attributed to them. Supervising architects are usually small firms with their only office near a given project, or larger firms with a branch office near that project. It’s a bit puzzling, and I’m not sure what function Stotser & Associates fulfilled in the Showcase SuperLux project, while the two firms named in my previous comment were undoubtedly both major players in it.

According to the National Amusements website this theatre is located in Chestnut Hill. MA. That is why it doesn’t show up on a Cinema Treasures search.

Chestnut Hill is an unincorporated village that is mostly inside the incorporated city of Newton, which is the part of it that the Showcase SuperLux is in. Newton contains all or parts of thirteen villages, but none of those villages are legal entities, just traditional names.

Anyway, the Showcase SuperLux should probably be listed as being both in Newton (the incorporated city) and in Chestnut Hill (the unofficial but traditional neighborhood.) If any theaters ever open in the entirely unrelated Chestnut Hill neighborhoods of the Massachusetts towns of Blackstone or Belchertown, well, we’ll just have to figure out what to do about them then.

An easy way to handle the problem is to go by the postal ZIP code. This matter became a problem for the agent for M-G-M when he arrived in Massachusetts in early-1941 to survey local movie theaters and he sometimes used the local neighborhood name instead of the actual town or city name. Example: the Regent Th. in Quincy MA which he listed as “Norfolk Downs, Mass.” He was merely repeating what he was told by the theater manager and didn’t realize that such a town did not exist and would be meaningless to anyone at M-G-M.

Why not go with the way it is listed on the website, that would solve any issues that may arise. 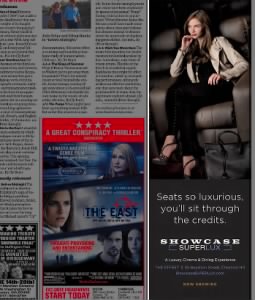