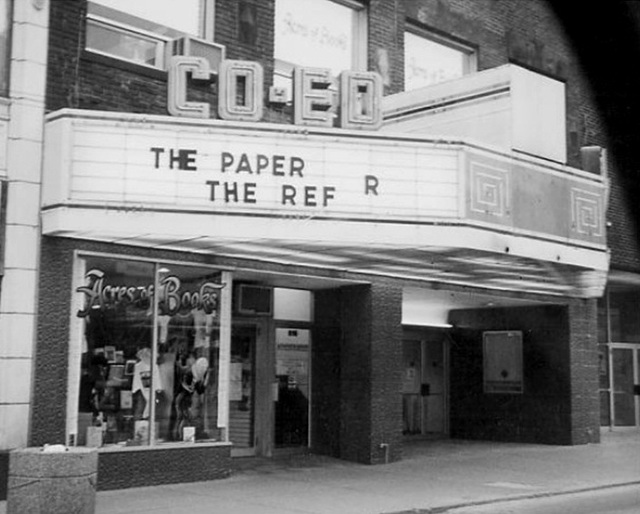 Built in 1938 for the LaSalle, Illinois-based Alger Theaters circuit, the Art Moderne-style Co-Ed Theatre could originally seat over 700, and cost around $300,000 to construct. The theatre was actually a reuse of two existing buildings on Green Street, which were entirely reconstructed to house the theatre as well as office and retail space on the second floor. Architectural firm Monberg & Wagner of Chicago, IL were in charge of the conversion.

The color scheme inside the auditorium (as well as of the theatre’s facade) was originally orange and blue, the colors of the University of Illinois at Champaign-Urbana. The Co-Ed Theatre featured an elaborate canopy marquee illuminated with neon in rainbow colors. A fountain once decorated the main lobby and the theatre was air-conditioned.

The Co-Ed Theatre was not only comfortable and ultra-modern, but had a then-cutting edge Simplex sound system, the only one of its kind at the time in Illinois, outside a couple of Alger theatres in Chicago. Its screen measured 18 by 14 feet.

Opening night was a gala affair, with overflow crowds. On screen, the main feature was Pat O'Brien in “Women Are Like That”, as well as newsreels, a short feature, and a Betty Boop cartoon.

By the early-1940’s, the Co-Ed Theatre has switched from first-run fare to second-run, while new blockbusters would play at Champaign’s larger movie palaces, the Orpheum Theatre and the Virginia Theatre. Attendance began to slip at the Co-Ed Theatre starting in the late-1940’s into the 1950’s with the growing popularity of television, so like many struggling theatres around the country, the management of the Co-Ed Theatre turned to gimmicks to try to draw in new audiences. In the Co-Ed Theatre’s case, it was CinemaScope (with stereophonic sound), installed in 1954, but to little success. Four years later, Alger Brothers closed the theatre.

In the fall of 1958, just months after it closed, the Co-Ed Theatre (as well as another closed former Alger house, the Princess Theatre) was acquired by the Kerasotes circuit, and reopened, returning to first run fare for the first time in over fifteen years. Seven years later, the Co-Ed Theatre was twinned, with the chain now showing first-run features in one auditorium, and art and foreign features in the other. The remodeling project cost over $50,000 and not only modernized the theatre’s appearance, but new projection and sound equipment was also installed during this time.

However, in less than a decade, the original auditorium, the Co-Ed I, went from art movies to adult features, while the newer Co-Ed II auditorium continued to screen first-run fare (and the occasional foreign film). Also, Kerasotes began a “midnight movies” feature at the Co-Ed Theatre in 1978, starting with “The Rocky Horror Picture Show”, appealing to the city’s large student population. In the early-1980’s, other “midnight movies” at the Co-Ed Theatre included “Pink Flamingos” and the first “Friday the 13th”.

In 1978, the Co-Ed Theatre was triplexed, followed a year later by its conversion into a quad.

By the early-1980’s, adult-features were replaced by films which would appeal to college students, mainly comedies and horror films. Foreign and art films eventually disappeared entirely.

In 1985, George Kerasotes formed his own chain apart from his brothers, GKC, which the Co-Ed Theatre became part of (as did other area houses like the Virginia Theatre and Thunderbird Theatre). While the opening of the Savoy 14 and other nearby multi-and-megaplexes in the area hurt the Co-Ed Theatre’s attendance, the theatre’s eclectic mix of first-run features and “midnight movies” helped it survive through most of the 1990’s (a fifth auditorium was tacked on in 1993).

When the Co-Ed Theatre was shuttered in 1999, it was Champaign’s longest continuously-operating movie house. A year later, the theatre was razed and replaced by a luxury apartment building.

Alger Brothers Theaters was formed by my dad, E.E. Alger and my uncle, Harold R. Alger. The home office for those and the other theaters was located in LaSalle, Illinois and not ever in Chicago.

The Alger Brothers Theaters was originally formed with one theater, the Albro and shortly after added the Princess in Urbana and Park in Champaign. The Coed was built and owned by The Campus Theater Corp
as an equal partnership between Alger Brothers and a Chicago based company (name escapes me).

After 50 years in the motion theater business, my dad made the decision to close and/or sell all of the theaters he managed which included those in Peru, LaSalle, Spring Valley, Princeton, Mendota, Rochelle, Champaign, Urbana, and Streator; all in Illinois and totalling 13.

Yeah!!!!!!!!! The Coed! We enjoyed many movies here when I was in school at U. of I. It was heavily remodeled (four or five screens) and had no architectural merit. But we crowded in there because it was in within walking distance of student housing (the college campus may be the last market in the U.S. where this matters for a cinema). I was sorry to learn that they took it down.

I began working at the Co-Ed, Autumn, 1976. My memories are a bit different than others. That winter season, we were running Rocky and Network (first runs) in the two auditoriums. Neither can be considered “adult” fare; both were academy award winning films.

The Co-Ed began running midnight movies long before Rocky Horror Picture Show became a cult favorite. I know; I worked many of those late shows on Friday and Saturday nights. In fact, I worked RHPS during its first “regular” run. It was not a well attended film; maybe 20 people came during the entire week! The midnight offerings ran the gamut from comedies to horror to soft porn. We had a security guard who would check IDs for us, as the box office was very busy for these films. One night, the guard thought it necessary to verify the age of one young man in line. The decision was made to let the patron in, despite being underage. By the time the movie started, he was legal — this was his buddies' method of celebrating a major birthday. After a particularly gruesome horror film, my coworkers wouldn’t let me walk home alone. Even jaded theater workers, who see ALL the movies, can be affected by them.

I began working at the Co-Ed when it was a twin; I stayed into the 4 screen era. The clients were primarily U of I students, but during student hiatuses, the townies would come out in force.

My time at the Co-Ed caused a life-long addiction to films, but I became a very discerning addict. I still enjoy a really good movie, and deplore much of the dreck that today passes for movies.

The May 8, 1938 issue of the Daily Illini reported that Alger Brothers, operators of the Princess and Park Theatres, and the A. J. Balaban Co., would remodel and expand a building at 614-616 Green Street, Champaign, for a movie theater to be called the Co-Ed. The project was designed by the architectural firm of Monberg & Wagner, who the article referred to as “Chicago theater specialists.”

I worked at the Co-Ed from fall 1975 to 1976 sometime. We were showing “Rocky Horror” and my favorite, “A Boy and His Dog” at midnight showings from that time. Good times.