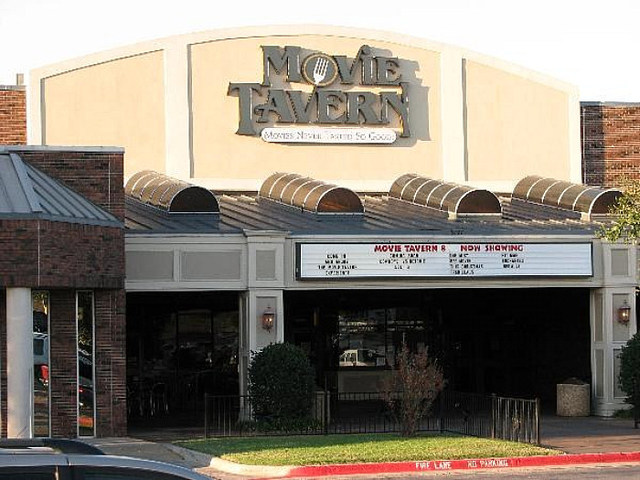 The Green Oaks 8 was opened by AMC on November 21, 1984. It became the Movie Tavern at Green Oaks on July 12, 2002. It was renovated completely with every other row removed to make room for the tables. Movie Tavern says that they have 16 locations in seven states showing first-run movies.

The Fort Worth Star-Telegram noted at the time that the 18-year-old AMC theatre had been vacant since September of 2000. On February 1, 2019 it was taken over by Marcus Theatres and renamed Movie Tavern by Marcus Green Oaks. It was closed in December 2020.

In March 2022 it was taken over by LOOK Dine-In Cinemas, and will reopen following restorations later in 2022.

This opened on 21 November 1984. Grand opening ad in photo section.

The mid-1980s was the era of the multiplex and for growing Arlington, Texas, four movie theater circuits were vying for the same zones. For South Arlington, the newly created Interstate 20 would soon create a retail nexus in South Arlington and exits from Fort Worth to Grand Prairie would become a major cinema-going corridor and . UA opened the UA Bowen 8 in 1984 along with the Las Vegas Trail 8, UA South 8, and UA North Star 8. Loews launched the 6-screen 20 & 287 as well as the Lincoln Square a year earlier. The UA Bowen 8 opened in 1984 and would be joined by the AMC Green Oaks, yet another eight-screen operation opening just about a mile away on November 21, 1984. Finally, General Cinema would open its eight-screener, the Arlington Park Square, in 1986 a few exits to the east as South Arlington was replete the multiplexes.

The circuits competed for clearances throughout the 1980s and 1990s. would come online within two years about two miles to the east. Up and down I-20, more theaters sprouted at exits such as the Cinemark Grand Prairie megaplex to the east, the Sony CityView at Bryant Irvin, et al. And by the mid-1990s, a new breed of megaplexes challenged the aging multiplexes.

AMC would close the Green Oaks in 1999 deciding against a lease renewal leaving at the 15-year point of a potential 30-year lease. It focuses on a new mall megaplex, the delayed AMC Parks that opened in 2002. Meanwhile, General Cinema would shutter all of its Tarrant County locations on October 5, 2000 including the nearby Arlington Park Square 8. Premier Theaters of Granbury took on a different complex, the Ridgmar Town Square, that allowed for pizza, appetizers and wine to be served in the complex becoming the Ridgmar Movie Tavern. It launched on November 16, 2001.

Deciding that similar magic could be found in the vacant AMC Green Oaks, the circuit completed a similar conversion creating the Movie Tavern at Green Oaks. It launched on July 12th, 2002 using it catchphrase of “Where movies never tasted so good.” A Movie Taverns would also be created at the Hulen Mall former UA Hulen 8 multiplex and Bedford’s Central Park 8 formerly of General Cinema and EFW operations. Movie Tavern claimed to be the originator of circuits that followed including Texas-based Studio Movie Grill and Alamo Drafthouse and AMC’s efforts with its Dine-In theatre locations and Cinemark experimenting with CUT!

Movie Tavern by Marcus Green Oaks was closed permanently by Marcus in December of 2020. Look Cinemas took on the location scheduled to open in later in 2022.