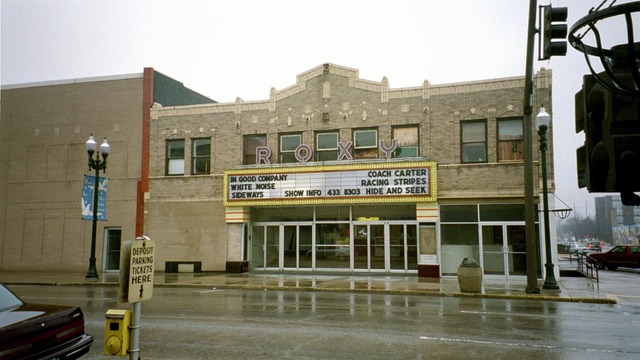 Originally opened around 1910 as the Gayety Theatre, a vaudeville house. In 1932 it was renamed the Roxy Theatre and became a movie theatre, operated by Alliance Theater Corp.

When GKC took over the Roxy Theatre in the mid-1980’s, the chain twinned the theatre. A few years later, four more screens were added when a new addition was built next to the old building.

I worked at the Roxy in Ottawa befor, during, and after the twin remodeling. I agree that it was in fact a vaudeville theater befor a movie house. The stage behind the screen was a full wood floor stage with flies above, and dressing rooms below. There was a light panel behind the stage with copper knife switches. I was told that it once had a balcony. This was probably one of the finest vaudeville theaters in Illinois in it’s day.

The Roxy was built circa 1910. During the Cold War, the basement served as an emergency shelter and there are still rations supposedly stored there.

The Roxy in Ottawa, was originally the Gayety and was a vaudeville house. It was an art showcase with six large paintings by Isabelle Sanders, an OTHS teacher, who was also an artist. They were of Starved Rock and other areas. My mom played the organ there during the silent era and at the Orphuem, too. I once helped her install new curtains, as she was an interior decorator, and was hired to do so. In the late 40s, shows ran Sun-Tue, then a double on wed with dish night, and then Thur -Sat. If the projectionist missed his cue, we would all stomp and clap until movie came back on. The Roxy greeted 3D with Bwana Devil and Cinemascope with the Robe. IT also featured the first push back rocking seats. The box office was out front on the sidewalk, and the original marquee hung over the walk and there was also an upright sign. For years, it was An Alliance Theater.

I remember and dearly loved Isabelle Sanders' paintings that were in the Roxy. arnie P, do you have any idea what happened to them? Please contact me…

The name change from Gayety to Roxy took place in 1932.

No longer operated by 21st Century Cinemas, this is part of the VIP Cinemas chain. https://www.roxycinemas.com/