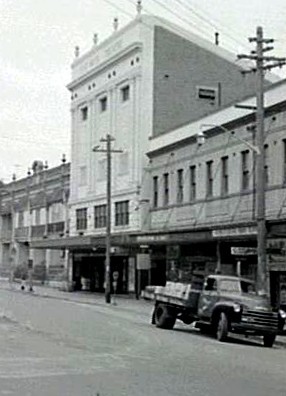 Named after the 5 streets intersection it sits upon, hence the name Five Ways. This cinema started in 1915, was rebuilt in 1929 and run by the Hickey Family. Tom Hickey ran it as manager and Col Hickey his brother was the projectionist and also told me he had done much of the electrical wiring etc in the building as he was a licenced electrician. I had my first job there in 1958 aged 15 years as assistant projectionist. Worked there for one year and left and the cinema closed in 1958.

The place was a time warp as everything in it dated from the 1920’s and earlier. The front awning was edged and lit up with blue stained glass original edison globes. Many a collector requested one even if it was not working. There were 3 cartons of them in the storeroom and I gave many away secretly as the projectionist was a maintenance miser and did not like replacing anything in the building if possible. I recall they had little glass points on the tip of the bulb, very early light globes.

The cinema after closing became a supermarket among other things. Today it is a bar and Christo’s Pizza restaurant.

For any old projectionists who may be interested it ran two Kalee 11 projectors with Raycophone sound and they never ever missed a beat. I remember that the dimmers that lowered the lights in the auditorium were porcelain cylinders and were filled with water and were in the roof above the projectors. A job I had to do once a week to top up the levels. They were dimmed by pulling a rope alongside projector 1. It was an interesting 1st job for a young fellow in 1958 and I went on to do projecting at three other cinemas as my family were in the movie business for many years.

I carry in my head many memories and much information and stories about many of Sydney’s old suburban cinemas and two of the drive in theaters as well, which my family ran.