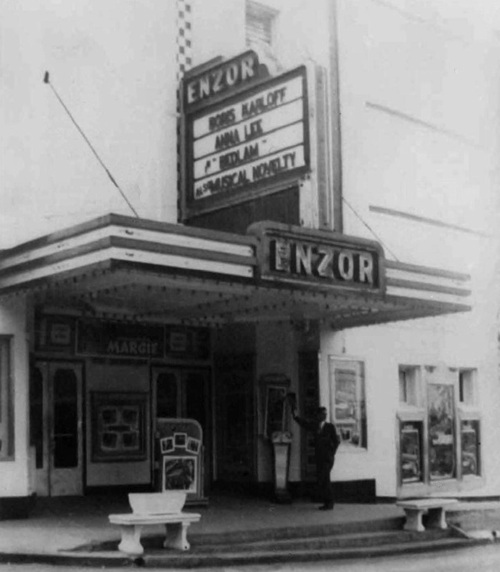 The Enzor Theatre opened in July 1936 with “Love Before Breakfast”. In the auditoriu, it had lights in the ceiling that looked like stars and the side-walls were decorated to feel like the audience was sitting in the courtyard of a Spanish garden.

All but the two side walls were demolished in 1962 and in 1963 a bank was built using them. It has since been demolished and a library has been built on the site.

Theatre opened in July 1936 and the Troy bank occupied the building from 1963.

The NRHP nomination form for the Troy Downtown Commercial Historic District (PDF here) says that the Enzor Theatre was designed by the Birmingham firm Okel & Son. Due to extensive alterations, the theater was determined not to be a contributing structure in the district. Nevertheless, the form contains a section of drawings, photos, and newspaper articles about the theater on pages 21 through 27. The Art Deco style house, which opened in July, 1936, was originally operated by Paramount affiliate Wilby-Kincey.

Architect Edward Okel had previously been a partner in the firm of Okel & Cooper, who designed the 1908 Grand Opera House in Montgomery. Okel also designed two project for Jake Wells' Bijou Theatre Company in 1908, to have been built in Atlanta and in Mobile, Alabama, but I’ve been unable to identify either house or determine if either was actually built. In 1938, his son William J. Okel drew the plans for a remodeling of a Wilby_Kincey house at Selma, Alabama, but again I’ve been unable to discover which house it was.