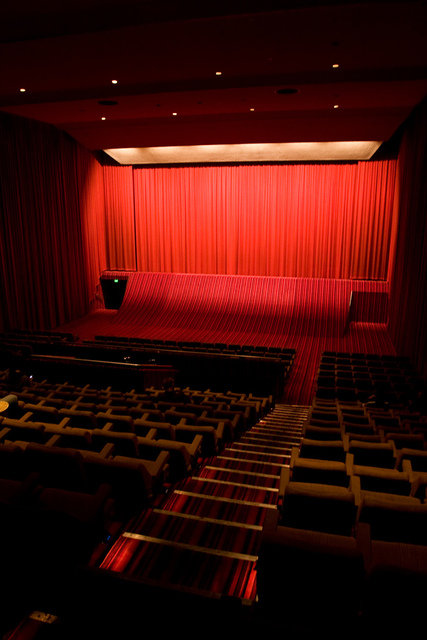 The four screen Cinema City opened 6th November 1980 with “The Blues Brothers” playing in one of the auditoriums. Rich multi-coloured carpets cover floor, steps, stairs and carry up for the full height of the inner walls with highly reflective walls. The coffered ceiling increases the apparent height and suspended from it are fluorescent tubes sheathed in a glittering chromium plate.

Cinema City’s lobby opens into an enormous space over 14 metres high. The stunning effect of unlimited space is multiplied by each wall being sheathed by mirrors. Chrome plated space frames adorned with lights, hang from the ceiling. The mirrors pick up the glitter and glamour of these features and reflect them on into what seems like eternity.

This was one of the City Theatres properties taken over by Hoyts in 1988, and immediately put on the market (for leaseback). It was sold for a reputed $10m in 1994. The fifth cinema was never added, and in the mid-1990’s, the four cinemas (still known as Cinema City, but now holding Hoyts Cinemas 1 - 4) held 494, 580, 394 and 790 seats. In 1999 it was reported that The Cinema City shopping arcade and theatre complex has been sold to Perth investor Westpoint Corporation for approximately $13m. The Cinema City was closed 17th October 2007.

The building was demolished and a 20 storey apartment complex built on the old grounds in 2008.

Cinema City was built built on the site of the former Haymarket building(and first site of David Jones in the City?),picture of demolition of the Haymarket building in the West Australian(21/11/1978). Cinema City and Arcade opened on 7/11/1980(on 4 different screens) with “The Blue Brothers”,“Flying high(Airplane in Usa)”,“Rough cut”,and “The Black stallion”. Cinema City may have been the first to have a lift for the disabled,and the second to have toilets for the disabled in the city(first cinema to have disabled. toilets unknown?). There was planned to add a fifth cinema,but it was built. Cinema City was closed on 17/10/2007. The cinema and arcade has been demolished except for the Anz bank,and Mcdonalds on the corner of Barrack Street and Hay Street,and the right hand side of the Barrack Street part of Cinema City Arcade used as offices while the 20 storey apartment complex was being built(use now unknown?).

The apartments that are there now, are called Equus Apartments(and Equus Arcade?). The photo of Cinema City, and the Equus Apartments(there now), both have Perth Town Hall(across the road) shown reflecting on the windows.