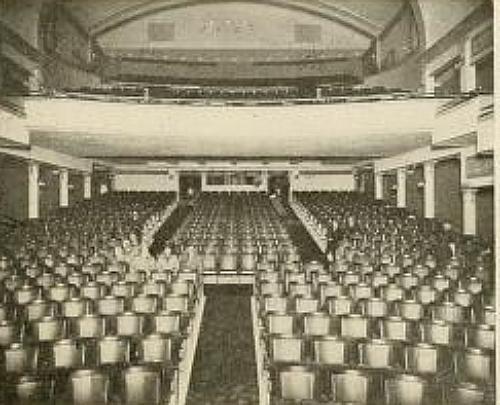 The Ideal Theatre opened in 1909. It was soon renamed Black Cat Theatre. It became the Alaska Theatre on May 12, 1914. By December of 1915, the name was changed to the Strand Theater when it was taken over by Tom Moore. The Strand Theatre is listed in the 1928 Film Daily Yearbook with 1,200 seats.

This article about the New Alaska Theatre appeared in The Moving Picture World of November 14, 1914. It says that the theater was designed by the local architectural firm of W. H. Milner & Co.

This essay from The Free Online Encyclopedia of Washington State History says that the Alaska Theatre was on the site of an earlier movie house called the Black Cat Theatre, which itself had opened in 1909 as the Ideal Theatre, the name having been changed in 1911. The essay claims that the existing building was extensively remodeled when it became the Alaska Theatre. I’ve been unable to find any period sources with information about the Ideal or the Black Cat. The essay also says that the Strand operated well into the 1930s.

I noticed that the ad for the Ideal and one of the ads for the Black Cat both use the line “Next Door to the Lois”. That must have been the Lois Theatre, a house that Alexander Pantages began operating as a legitimate stock theater in 1905. It was named for his wife, and was located on the corner of 2nd and Seneca, so the Strand could not have been too far from that intersection.

As near as I can discover, the Lois never showed movies, but was destroyed by a fire in December, 1911. When a new Pantages Theatre opened in 1915, the old Pantages was renamed the Lois and became a movie house.

Also, a modern office block stands where the Strand used to be, so we can mark this theater demolished.

Here’s something about the Strand from the October 6, 1917, issue of The Moving Picture World:

“Seattle to Have Third Orchestra for Interpreting Pictures.

“Seattle, Wash. — When the Strand theater opens with its first Goldwyn picture, ‘Polly of the Circus,’ on September 22, the house will be all dressed up with new carpets and new paint; and the picture will be interpreted by a new orchestra of twelve expert soloists led by the famous violinist, M. Cherniavsky, one-time teacher of Mischa Elman. With these improvements in his house and in his policy Mr. Smythe expects to capture his share of the increased business that is coming to Seattle theaters with better general business.

“With so many added expenses the Strand manager has found it necessary to raise his admission price in the evening to 20 cents, the matinee price remaining at 15 cents. He is the second theater manager to raise to 20 cents, James Q. Clemmer having made the same change on August 25.”

It looks like I set Street View to the wrong side of the street. The Strand was on the east side. This pre-1911 photo shows the view north along Second Avenue looking across Seneca Street. The Pantages Theatre is on the northeast corner of Second and Seneca, and the Lois Theatre is on the southeast corner. Adjacent to the Lois is a building with a marquee, but I’m unable to read the writing on it. There is also a sign indicating that a five-cent theater might be in the building, which could have been the Ideal/Black Cat.

Comparing this photo with the photo of the Alaska Theatre in The Moving Picture World it looks as though the Alaska building occupied part of the lot where the Lois Theatre had been as well as the entire lot where the Ideal had been. If that was the same building the Ideal was in, it was altered beyond recognition.