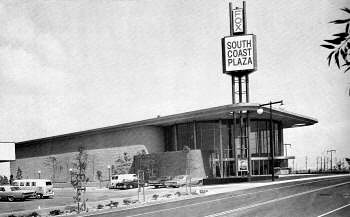 The Fox South Coast Plaza Theatre was opened by National General Theatres on March 13, 1968 with Warren Beatty in “Bonnie and Clyde”. In 1973 it was taken over by Mann Theatres who later divided the auditorium, which seated about 1,000, into two. On June 23, 1976 a new building built behind the original one became its third screen.

It finally closed in 2000 because of Edwards' bankruptcy. Edwards once had plans to turn it into a single-screen stadium seating about 500 and offering dinner service. Its location, next to the Orange County Performing Arts District, made it a prime candidate for some type of reuse.

The Orange County Register said after closing that ‘the Arts District needs a “populist” attraction such as a movie theatre to broaden its appeal’.

Sadly this was not to be, and the theatre was demolished in March 2008 and in 2022 the site is a vacant piece of grassland.

Seeing the video of the demolition of the South Coast Plaza theaters is painful for me, especially since I spent so many memorable hours at this theater, seeing I don’t know how many incredible films from the late 70s, 80s, and 90s. Everything from Disney films like THE CAT FROM OUTER SPACE and FREAKY FRIDAY to SUPERMAN to RAIDERS OF THE LOST ARK to POLTERGEIST (opening night, Friday, June 4, 1982!) to re-releases of the first two STAR WARS films to DIE HARD to BRAVEHEART. This was, at one time, one of the premiere theaters in Orange County. Many 70mm presentations. To see it just unceremoniously trashed like this, so completely erased from existence with no trace that it was ever there……that hurts. It was there, dammit. I loved going there. Why’d they have to go and tear it down?

Steven Spielberg’s “Close Encounters of the Third Kind” opened here forty years ago today. This venue was among only about three dozen nationwide to play the movie in a 70mm presentation, and the engagement here played 42 weeks, the longest on record for this film in the United States. For more, please see my retrospective article celebrating the movie’s 40th anniversary.

My December 14th comment regarding the new “Close Encounters” article actually belongs on this page instead. I didn’t realize there’s a separate database entry for the #3 screen. Which begs the question as to why the two entries aren’t combined into one.

Robert Altman’s “Popeye” starring Robin Williams and Shelley Duvall opened at the SCP III 40 years ago this weekend back in 1980. I can remember waiting in line for at least an hour that first Saturday for a mid-afternoon showing.

Starring Richard Dreyfuss, Melinda Dillion & Francois Truffaut, the film opened at number one, expanding to 270 screens nationwide after a month-long exclusive booking in LA & NY, and along with the debut of “Saturday Night Fever” dethroned “Star Wars” after months at the top spot.

I saw it at the SCP III (in the big theater) during those first few weeks of release as a 7-year-old and have been a fan of it & John Williams' unforgettable score ever since.

Is there anything on this site now?