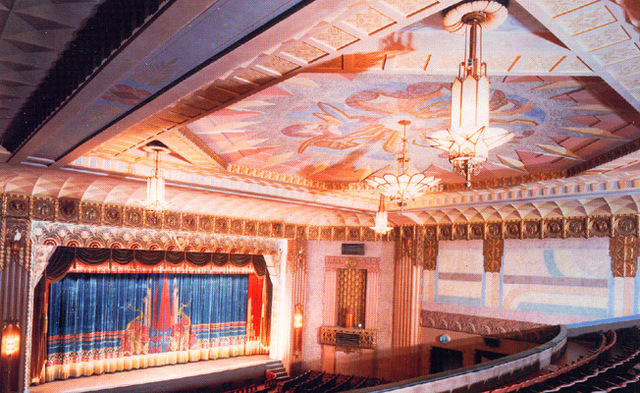 This extravagant movie palace was built in 1931 with Art Deco style furnishings, murals and ornamentation in silver, copper, and gold leaf. Its architect was B. Marcus Priteca. Due to the Depression, it didn’t open until 1936.

The Smithsonian has ranked it fifth in the nation for its architectural value. The Washoe Theater was listed on the National Register of Historic Places in 1982.

Here is another photo:
http://tinyurl.com/365gjn

There was another old theater on Main Street in the 1950s. No clue as to the identity, though. It may have been a playhouse:
http://tinyurl.com/2vhf4y

I should have said “There was another old theater on the right side of the street, that said ‘theatre’ on the side of the building”. My mistake.

It looks like the theater in the photo starts with an I. Then again, it could be an old ad for a theater in a different location.

The Washoe was built in the Nouveau/Deco style, part Art Nouveau, part Art Deco influence, The Center theatre was where the credit union now stands on park and the Bluebird was down a block on part past St. Paul’s church! – the Washoe was the 3rd theatre on the location where it is at, before that was the Sundial and before that was the Margaret Theatre. The highland theatre I believe is across from 4 star video, it is now a senior citizens center, still has the original seats (built on a slope!)….
The Washoe has the curtains from the Bluebird stored upstairs, if it isn’t the exact original in the theatre, it’s simply been repaired!

The projection booth of the Washoe is equipped with it’s original three Super Simplex projectors. One of them is still sporting a carbon arc lamphouse and this machine is regularly used to run the previews on. The other machines share duty from the platter system. An Ultra Stereo processor and QSC power amps drive the vintage Altec speakers behind the screen.

From some years ago, a short magazine story, with pictures, on the Washoe.

Opened in 1936, the Washoe Theater, along with Radio City Music Hall in New York, were the last American theaters to be built in an Art Deco spinoff known as Nuevo Deco. Since Anaconda was the company town for the hugely successful mining company of the same name, money was no object when the theater was built.The interior of the Washoe is stunning. So much so that the Smithsonian Institution selected it as the 5th most beautiful theater in America.

Great pictures of, and more info about, the Washoe at the Library of Congress website: https://bit.ly/IPnlb9