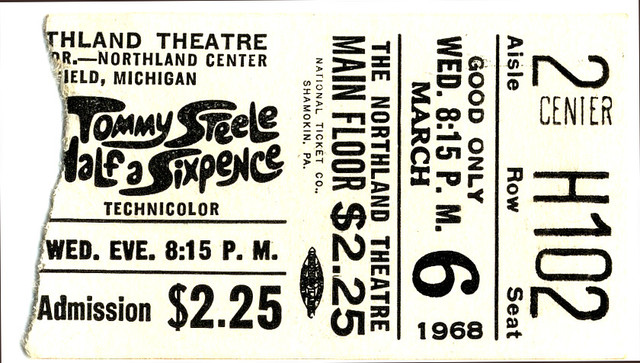 Opened November 17, 1966, the Northland Theater was designed by architect Ted Rogvoy, and located at the Northland Mall. This modernistic-style movie house with its unusually-shaped curving and upturned roof could seat nearly 1,500.

The large original auditorium was twinned in 1976. A decade later, AMC Theatres acquired the Northland Theater, but only three years later, it was shuttered, due in large part to declining audiences and growing violence in and around the theater (a problem shared with the Americana Theater as well in the late-1980’s).

Ted Rogvoy was my great uncle. He was a man “ahead of his time” in many ways. My visits to his home were filled with great memories.

Do you have any pictures of the murals from the Mercury Theater in Detroit?

I wish to ask again, if there are any pictures of the Mercury during its heyday. Particularly the murals.

Here’s a new 4-page 50th anniversary FIDDLER ON THE ROOF retrospective featuring a roadshow playdate chronology and historian Q&A. The Northland’s 57-week run is mentioned in the piece.