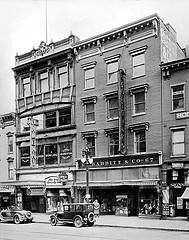 In the January 23, 1919, issue of The Albany Evening Journal, 69 N.Pearl Street is given as the address of a movie house called The Annex.

The building has not been demolished, though. As of 2010, a sushi restaurant was renovating it. It had previously been an OTB shop. Currently, this is the address of what appears to be a nightclub called the Buddha Tea House. This is their Facebook page.

The building is supposed to be one of only two old commercial structures with cast iron fronts that survive in Albany.

There was at house called the Albany Theatre at least as early as 1892, and it was part of the Proctor vaudeville circuit after about 1900, but I don’t know if it was this house. It was supposed to have been designed by Francis H. Kimball, and I don’t think he did cast iron fronts. For now, this Albany Theatre looks to have been just a conversion of an existing building into a modest sized movie theater that was renamed the Albany sometime after 1919.

This web page about Proctor’s Theatre in Troy has a timeline of his theaters, and lists Proctor’s Albany Theatre opening in 1899, Proctor’s Annex Theatre (which must be this house) opening in 1904, and Proctor’s Grand Theatre, Albany, opening in 1913.

When Google’s camera car last went by in June, 2011, the Albany Theatre building was occupied by the Figure 10 Restaurant and Jazz Lounge. As I said in my earlier comment, it now houses the Buddha Tea House.

Although the Rittner blog cited in my second comment says that Proctor’s Annex opened in 1904, I’ve found and item in the September 26, 1908, issue of The Billboard which says that F. F. Proctor had leased the building at 65 N.Pearl Street formerly occupied by the Theatre Comique (a 1907 directory of Albany lists a Comique Theatre at 69 N.Pearl Street, so Billboard got the address wrong) and would open a moving picture theater to be managed by Guy Graves. Guy Graves was noted in trade publications as manager of Proctor’s Annex for the next several years.

69 North Pearl was in 1912 home to the General Film Company. An explosion caused a fire and the loss of two people’s lives. One being my uncle. I have the news article if anyone is interested.