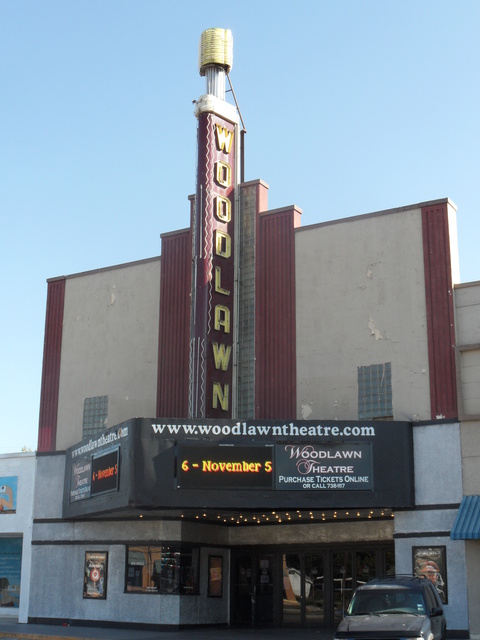 This theatre sits on the northwest side of San Antonio. The Woodlawn Theatre opened on August 17, 1945 with Elizabeth Taylor in “National Velvet”. The world premiere of “The Alamo” starring John Wayne was held here in 1960.

It is now used for the performing arts in the area. The neon sign, which was not turned on for many years, has been restored and illuminated in 2012.

The Woodlawn Theatre is now under the operation of Amphisphere Theatre Productions and will be reopening September 30, 2006. We have reduced the theatre seating to install some dinner theatre seating and increase the size of the stage. The theatre will show classic movies, independent film, artshows, musical theatre, live music, live comedy. The origional architecture is being restored and will preserve the 1950’s Art Deco Style for many more generations to enjoy. For more information go to www.amphisphere.com

GREETINGS SAN ANTONIO! I am JONATHAN PENNINGTON the EXECUTIVE ARTISTIC DIRECTOR for AMPHISPHERE THEATRE PRODUCTIONS. My team is vastly restoring the amazing art-deco WOODLAWN THEATRE. Our passion is to meet your entertainment needs and expectations. Our first musical theatre production is “LITTLE SHOP of HORRORS!” The all-star cast will literally “knock your socks off!” The WOODLAWN THEATRE will not only be the home for live theatre, but also the home for classic movies.

WE ARE CURRENTLY IN GREAT NEED OF SPONSORSHIP AND DONATIONS TO FUND OUR SEASON. FOR MORE INFORMATION CALL (210)738-1117. THANKS FOR YOUR HELP!

2007 Update. Amphisphere Productions at the WOODLAWN Theatre had NINE live performances! There are plans for another awesome year…starting off the year is TAMING OF THE SHREW, which is the only non-musical show. GREASE is the word! Coming to the Woodlawn February – April 2008!

Amphisphere is now a non-profit organization and in need of sponsors. Please contact the theatre to help keep this historic theatre alive.

In addition to performances, classes are offered in the evening and day (for homeschoolers).
Theatre 210-738-1117.

Any chance anyone can add present day photos of the exterior and interior of what seems to have turned out to be a nicely fixed up theater?

Here is an undated photo:
http://tinyurl.com/klmn4s

Very pleased to report that the Woodlawn Theatre is alive and kicking as a thriving community theater. Just recently, the neon marquee was repaired and re-lit for the first time in nearly 40 years. It is very much well on the way back to its former glory.

Where did all these 70mm/35mm Hard Ticket Roadshows play in San Antonio during the late 1950’s, 1960’s and early 1970’s? I see the Broadway & Woodlawn played a few. To give you an example: SOUTH PACIFIC, EXODUS, WEST SIDE STORY, EL CID, THE LONGEST DAY, MAD WORLD, GREATEST STORY, BATTLE OF THE BULGE, THE BIBLE, HAWAII, SAND PEBBLES, GONE WITH THE WIND (67 reissue) OLIVER, PATTON, TORO,TORO, TORO, HOW THE WEST WAS WON, DOCTOR ZHIVAGO. Did they have a hard ticket run?