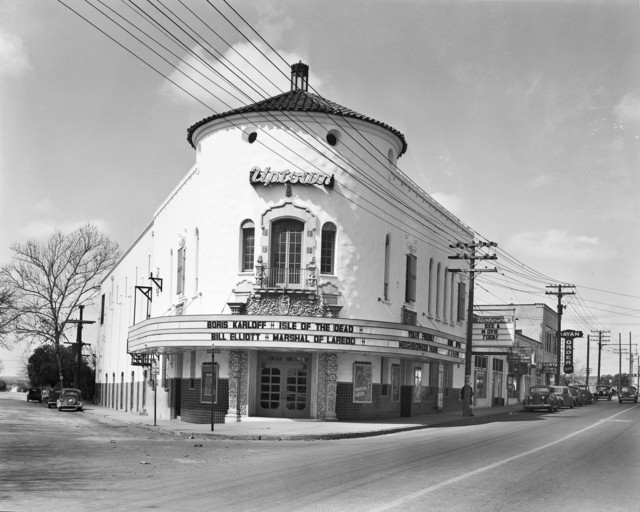 The Victor’s Uptown Theatre was opened August 18, 1928 with Laura La Plante in “The Love Thrill”. It was designed in a Spanish Moorish style and was equipped with a Victor Reuter organ which was opened by organist Paul Kinard.

The main entrance door on the corner with Fredericksburg Road & W. Ashby Place has now been bricked in and the tiles around the building have been removed. They kept the arch designs around the door and window. You would not be able to tell that this was once a theatre. Entrance to this parish hall is on the side of the building today.

I viewed inside when the door was open one day and saw beautiful Spanish tile inside the entrance and around the walls, but I don’t know if this was part of the theatre when it was open.

The Uptown Theatre was still open in 1950 operated by Claude Ezell and Associates Inc. On December 25, 1951 it was renamed Arts Theatre, but had closed by 1955. It is now in use as St. Ann’s Parish Center.

The address of the Uptown Theater was 701 Fredericksburg Road, not 710. Links to pictures of the carvings surrounding the entrance:

The Uptown after nearly a year in construction adds another link in the chain of 10 suburban houses to be owned and operated by the Victor Theater. Inc., which has been operating in San Antonio nearly a year. The new theater is acclaimed one of the most beautiful in the Southwest and is said to be the seventh theater of its class erected in Texas. Constructed and designed along lines of Moorish architecture, the Uptown is scheduled to be one of the foremost show places of San Antonio.

Nothing was spared to make it one of the finest suburban theaters in the country. Much interest in the opening has been manifested by the hundreds of phone calls relative to the opening date, and record crowd is expected at the first show. The Uptown will operate on a policy of continuous performance along similarly established lines of downtown deluxe homes, beginning at 1 p.m. and closing at 11 p.m. One of the features of the Uptown is the Victor Reuter organ, with Paul Kinard, organist at the console.

What is expected to be the outstanding feature of the theater policy is the sale of a family ticket, which will admit an entire family to the theater for the four complete changes at a very nominal cost. It is the first of its kind ever offered the public here.

The screen feature for the first three days will be a Clara Bow special “My Lady of Whims” which has been given much favorable comment in the advance notices. In this photoplay Clara is co-starred with Donald Keith, who also teamed with her in “The Plastic Ageâ€. Clara has been heralded as "always getting her man”, and a shining example of “it”, but in “My Lady of "Whims” this supposedly subtle quality fails for once, seemingly to make the exception, and Clara is somewhat extensively manhandled. Besides the screen feature a comedy, news reel and scenic will be shown.

It is announced that Sunday. August 18, at 6:30 p.m. John Victor, president of the theater corporation, who besides being a showman also is the leader of the Third Symphony Orchestra of Texas, will conduct the Uptown Theater Orchestra in a â€œTwilight Musical Concert" playing the William Tell Overture, augmented by special scenic and lighting effects.

My family moved into the neighborhood near the theater in 1937 when I was 5 and I went to the Saturday matinee faithfully.
It was always a treat as it was one of the few building that were air conditioned in San Antonio and it meant an afternoon of relief from the heat.The entrance was through a cylindrical tower done in Spanish style as the picture shows. I wish there were some pictures of the foyer as in the center was a circular fountain stocked with goldfish. There was glazed tile throughout the foyer and it was always a lift to enter and feel the coolness and hear the gurgle of the fountain.

I remember going to the Uptown in 1946 when we moved to SA and I attended St. Ann’s school. I recall a big conflict between the Uptown and St. Ann’s (possible with the archdiocese of SA) when the Uptown started showing foreign “Art” films. They were pretty mild by today’s standards, but St Ann’s felt insulted by the fact that the church was situated next door and the nun’s residence was across the street (Ashby, I think). St Ann’s got the ultimate revenge by buying the building and converting it into a parish hall. This was after the new church was constructed. The Uptown continued showing “Art” films. “And God created Woman” was an example. Such memories!