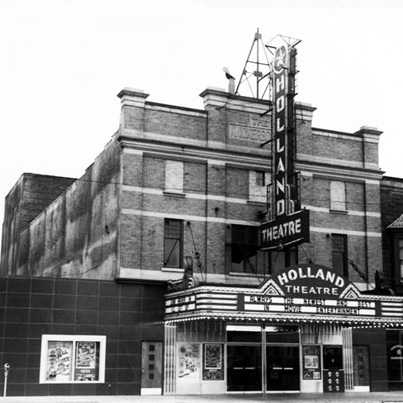 The Knickerbocker Theatre was built, along with much of the rest of the surrounding block, for Tieman Slagh, who wanted to bring vaudeville to Holland. His theatre was named for a popular early-20th century New York City playhouse.

Construction began in 1910, after four earlier attempts by Slagh to get a construction permit were rebuffed by the city fathers.

Slagh himself was killed before the Knickerbocker Theatre opened–as he was putting lightbulbs in the marquee, he fell off a ladder and broke his neck.

A new owner was eventually found, and the theatre opened in 1911 as a vaudeville house, though it soon began to screen movies as well.

By 1941 the Knickerbocker Theatre received a new name, the Holland Theatre, which it was known as for much of its time as a movie house. It was operated by the Butterfield Theatres chain.

In the 1960’s, the Holland Theatre received a well-meaning modernization, which covered up its Neo-Classical style façade and much of its interior décor.

In 1988, the theatre was purchased by Hope College. Two years later, the theatre received a renovation, including the removal of several rows of seats to make more legroom, an updated lobby, with a new concession stand and larger restrooms, new lighting, heating, air-conditioning, and projection and sound equipment. The old façade was uncovered and restored to its original appearance. At the time of the renovation, the theater’s original name was also brought back after decades.

The college uses the Knickerbocker Theatre for concerts, poetry readings, and live performances, as well as for screening art and foreign films.

What a lovely theatre in Holland MI, home of the Tulip Festival and Hope College. I happened upon this link as I was researching another Knickerbocker that was in Columbus Ohio. In a recent magazine called Reminisce Extra there is a page entitled When Movies Were Magic and it mentions that the Knickerbocker in Columbus Ohio was owned by the Pancake Brothers. They offered the kids “The Free Show” and sometimes a free bottle of Pepsi or Royal Crown cola. In another article it says that during the 40’s in Lawrence, MA was the only city in the country that had 5 theatres in a one-block area, the Modern, the Broadway and the Palace with the Victoria across the street. Around the corner from “theatre row” was the Premier Theatre on Essex Street. About a quarter mile off Essex on Lawrence Street was the Warner, where Dorothy Lamour once led a war-bond rally. About a mile north of “theatre row” on Broadway was the Star Theatre, where free dishware was given out during Saturday matinees featuring the Buck Rogers serials starring Buster Crabbe. There were also the Capital Theatre on Common Street and the Central Theatre on Haverhill Street. Movies were the main attraction for most of us in those days, and there certainly were many theatres to choose from. These memories were contributed by Bill Guay of Salem, NH and Dale Stone of West Jefferson, OH.

Great photo and will forward it to a friend of mine whose daughter will be attending Hope College in Holland MI next Fall.

Here is a 2/6/54 ad from the Holland Evening Sentinel:
http://tinyurl.com/co5thj

I think Holland should be the primary name with Knickerbocker as an AKA.

It still says Knickerbocker on top of the building and on the marquee now.This naming thing is confusing since many theatres have have many names.AKA are good for people trying to look up a theatre by the name they know it as.