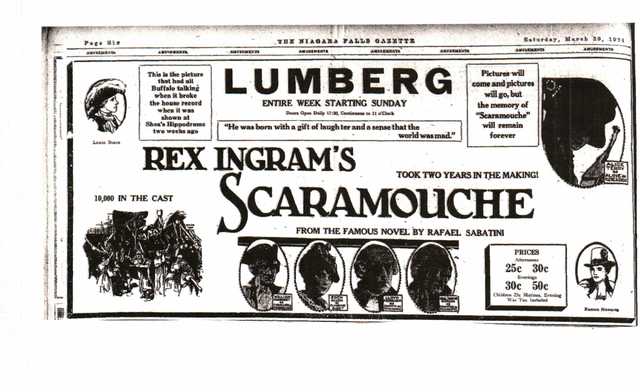 The Lumberg Theatre is included on a list of motion picture theatres published in Billboard on December 31, 1910. The proprietor at that time was H. Lumberg. By 1916 it was known as the New Lumberg Theatre and had been equipped with a 2 manual Marr & Colton organ.

The Lumberg Theatre continued operating into the 1920’s. In late-1925 it was briefly renamed Ritz Theatre, before going back to its original name in early-1926. The Lumberg Theatre is listed in the 1927 Film Daily Yearbook with 800 seats. It was closed May 20, 1928 and was soon demolished.

There was also a Lumberg Theatre in Utica. The Lumberg Theatre in Niagara Falls might have had at least one other location besides the one listed in Billboard in 1910, or perhaps the original theater was rebuilt or expanded. This item is from The Moving Picture World of July 15, 1916:

This could have been the 800-seat house listed in the 1927 FDY. Still later there might have been a third location, or a new theater with another name owned by the Lumbergs. This item is from the May 21, 1921 issue of The American Contractor:

Cinema Treasures does not currently have a theater listed on 3rd Street between Niagara Street and Ferry Avenue. Google satellite view doesn’t show any buildings fitting the project’s description on that block, either, so if the place was built it has probably been partly or completely demolished.

A “25 years ago” feature in the July 9, 1941, issue of the Niagara Falls Gazette reveals that the 1916 opening of the Lumberg Theatre cited in my first comment was indeed a reopening after an expansion. “The theater owners had purchased the adjoining store of George B.Clark which permitted the doubling of the auditorium capacity” the article said.

From sometime in 1925 through the first part of 1926, the Lumberg Theatre was called the Ritz Theatre. This web page features a December 19, 1925, ad for the Ritz.

The Wednesday, August 18, 1926, issue of the Niagara Falls Gazette said that the Lumberg Theatre would reopen under its old name the following Sunday as the exclusive home of first-run Paramount films in Niagara Falls. Atlas had closed the house for several weeks to renovate and to upgrade the theater’s mechanical systems.

The June 29, 1928, issue of the Gazette reported that the Lumberg Theatre and an adjoining store building had been razed and would be replaced by a new store for the S. S. Kresge company. The article noted that A. M. Atlas had taken over operation of the Lumberg Theatre in 1925, and had recently disposed of the building. It also noted that the adjacent store building had housed the city’s first storefront movie theater early in the century. It didn’t give that theater’s name, but it had been operated by Benjamin Goodman, who had previously run a restaurant in the space.