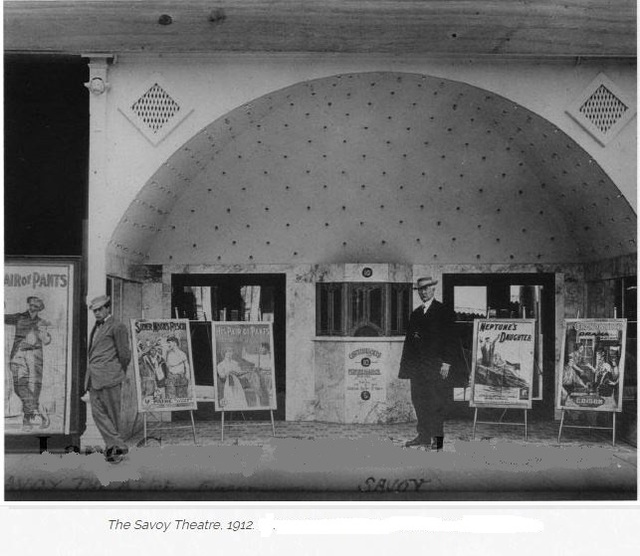 The Aloha Theatre opened at this location in April of 1909 and from 1912 through June of 1918 it was known as the Savoy Theatre. According to a 1985 story in the Eugene Register-Guard the, Savoy Theatre was operated at one time by J.J. Bryan, owner of the Grand Theatre and Electric Theatre in Springfield.

In 1918 A.H McDonald bought the building and it opened as the Castle Theatre on November 1, 1920. All on one floor, the 600-seat theatre was said to have the design of a Moorish castle. The Film Daily Yearbook of 1922-23 listed it among Oregon’s “Important First Run Houses.”

On November 10, 1923, the Register-Guard reported that the A.H. McDonald and his son Donald had sold the building but their Castle Theatre Co. still had two and half years to run on the lease. There was a provision in the contract that the lease would be given up when their new theatre opened on Willamette Street. It was also noted that the Castle building could not be used as a theatre when the McDonalds moved out. The Castle Theatre, which set a sales record and sold for $60,000, was considered one of the best retail locations in Eugene.

On January 31, 1925, A.H. McDonald ran an advertisement noting that it was the last day of operation for the Castle Theatre. The senior McDonald passed away before his new theatre, named the Lowell Theatre, opened on May 7, 1925. A day later, in response to a petition from the community, Donald McDonald announced that the Lowell Theatre would be renamed the McDonald Theatre in memory of his father.

From 1925 to 1939 the former Castle Theatre was home to the Bank of Commerce and from 1939 to 1969, Miller’s Department Store. In the early-1970’s, urban renewal was in full swing in Eugene. In May of 1971 the city of Eugene published a notice that it was accepting bids to pave over 840 Willamette Street for a parking lot.