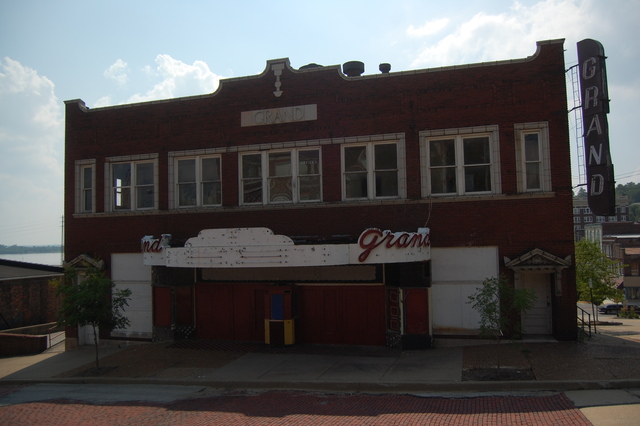 The Grand Theatre opened December 4, 1920, and was the largest theatre in Alton at the time, seating around 1,400, though later, seating was reduced to a little over 1,000.

It cost $150,000 to build and was managed during most of the 1920’s by William Sauvage, who also ran a handful of other Alton movie houses, including the Hippodrome Theatre and Temple Theatre.

In 1954, CinemaScope was installed at the Grand Theatre.

The last movies shown at the Grand Theatre were a double-feature of “Heavy Traffic” and “The Nine Lives of Fritz the Cat” in 1977. Afterwards, the theatre was “temporarily” closed, but the “temporary” closing has lasted until the present.

It does get some use during Halloween as a “haunted theatre” (Alton is reputedly one of the most haunted cities in Illinois) but plans to reuse the Grand Theatre for a performing arts center or movie house have not gotten beyond talk yet.

The Grand Theatre is the only classic movie house in Alton remaining mostly intact whereas the others which are still standing today have been repurposed for other uses and no longer resemble their former selves.

“ALTON – The Alton Historical Commission on Tuesday will consider whether it should designate the old Grand Theatre as a city historical landmark.

Commissioners will have 30 days to review testimony and submitted information and make a decision, which could be appealed to the City Council.

Bill McKenzie of Alton this summer spearheaded an effort to get the 90-year-old building, 230 Market St., placed on the city’s landmark list so it might qualify for tax credits for renovations.

He brought his supporting information to a commission meeting Aug. 17. Members voted to grant the hearing, despite property owner Ed McPike’s contention that the structure is not historically significant."

“Twenty people attended Tuesday nightâ€™s public hearing on the matter, with three speaking in favor and the owner of the property at 230 Market St. once again saying the building is not historically significant.

“We believe a restoration of the Grand Theatre can be the locomotive driving Downtown development,” said Bill McKenzie of Alton, who formed a committee of citizens wanting to save the building.

“The wave of the future is tourism,” McKenzie said. “Olin is on life support, the glass factory is not coming back and neither is Alton Box Board.”

I am one of the three who spoke at the hearing in favor of the landmark status for the Grand Theatre in Alton, Illinois.
Grand theatre is valuable to the architectural heritage of Alton. The Grand represents, the broad national architectural and artistic patterns of United States history and contributes to our understanding and appreciation of those patterns.
I will speak to the Grand Theatres artistic value.
The Grand Theatre provides significant value for the study of a period, style and method of construction that brings exceptional international standards of beauty to Alton.
The architecture of the Grand Theatre is Art Deco which is based on a rhythmic arrangement of geometric shapes. it is widely considered to be an eclectic form of elegant modernism, being influenced by a variety of sources. The age of Modernity introduced new high speed forms of travel which exposed artists and designers to diverse international styles. This along with so-called “primitive” arts of Africa, as well as historical styles such as Greco-Roman Classicism, and the art of Babylon, Assyria, Ancient Egypt and Aztec Mexico.[3 ][22] Art Deco has been influenced in part by movements such as Cubism, Russian Constructivism and Italian Futurism,[15] which are all evident in Art Deco decorative arts.. Art Deco also drew on Machine Age and streamline technologies[16] such as modern aviation, electric lighting, the radio, the ocean liner and the skyscraper for inspiration.[3] Streamline Moderne was the final interwar-period development, which most thoroughly manifests technology. Art Deco was an opulent style, and its lavishness is attributed to reaction to the forced austerity imposed by World War I. Its rich, festive character fitted it for modern contexts, examples include The Arcada Theatre, in St. Charles it was designed by Elmer F. Behrns and opened in 1926 and the Pickwick theatre in Chicago built in 1929 listed on the national register of historic places.
The Grand Theatre has high quality examples of this past architectural style and unusual architectural characteristics that meet the criteria for landmark status.

The Commissioners gave us nine days, starting today to submit any statements regarding the landmarks status. This status will subject the owner to limitations regarding demolition and construction of the building. It is the first step in securing a future for the theatre. It would also trigger potential funding for a NFP organization to buy and remodel it.
I have read the Grand Theatre evaluation for renovation and restoration report from Daniel P. Coffey and Associates. March 8, 1991.

The report was produced for the current owners of the building on a volunteer basis. The review was limited to a visual inspection of the facility.
-Daniel P. Coffey and Assoc. previous experience with theatre restoration.

A few Highlights from the report are here:

“Interior decorations are still visible today they can be attributed to the 1938 remodeling"
"The entrance faÃ§ade is a traditional "main street” style.“
"The preliminary review of the theatre indicates the primary existing structure to be in good condition."
Under the Program analysis and requirements section of the Facility Master Plan it reads:
"The Grand Theatre was designed as a movie theatre and as such could easily function in this capacity again.”

Thank you all for your interest in the Grand.
Richard Osborn

How do you know about the Robert-Morton theater organ size 2/8 and its installation date?

Is anyone familiar with
Illinois Theatre Association donating funds for theatre renovation?
Is there a public record of past donations?

The Grand Theatre in Alton is now a city landmark. The historical commission voted to grant the old main street theatre landmark status.

The city council reversed the decision of the historical commission.
It is not a city landmark.

This item from the May 22, 1920, issue of The American Contractor must be about the Grand Theatre (complete with misspellings):

The Grand Tehatre buildingis probably only about 60 feet wide, but the lot on which it sits is probably 145 x 90. Newspaper items transcribed on this web page about theaters in Madison County say that John Jianakopolis was the owner of the Grand Theatre, and that it was built by H. H. Unterbrinck. Lucas Pfeiffenberger was one of Alton’s leading architects of the period.