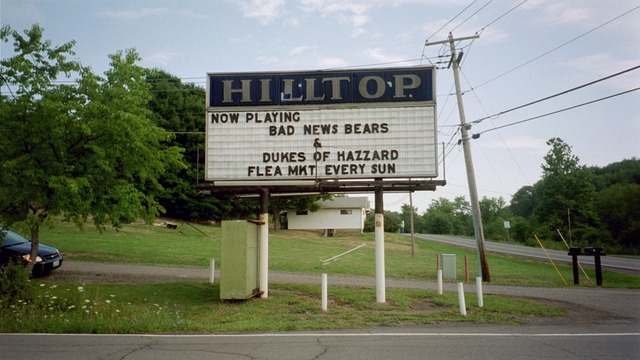 The Hilltop Drive-In opened July 19, 1950. Car capacity is listed at 500. The drive-in was in operation open seasonally until 2015 when it was closed pending the purchase of a digital projector. It was reopened in spring of 2017.

As of 2016, the Hilltop is on hiatus until they obtain the funds for a digital projector. Let’s hope and pray that they get one soon.

The Hilltop announced it will re-open for the 2017 season with digital projection in the spring.

The 1952 Theatre Catalog listed it owned by Charles Pittinger and Louis Hanna.

The 1952-66 Motion Picture Almanacs listed it only with with Hanna Theatre Service. In the 1978-82 editions, after ownership info returned, it was Anas Weir. The Hilltop was gone by the 1984 MPA.

In Brian Butko’s book Greetings from the Lincoln Highway, he wrote of the Hilltop (just a short detour away), “The one-screener opened in 1950 and was closed from 1984 to 1989.”

The Weirton Daily Times wrote last year that “the Hilltop Drive-In has been under the same family ownership since Joe Danko bought it in 1988. Danko passed the ownership on to his daughter and son-in-law, Katie and Harry Beaver, of Rogers in 2014.” Danko was the long-time projectionist, and he kept a ledger of every film shown there since 1951.

After being closed for most of 2016, Katie found a 35mm distributor so she could reopen for a few weekends. Then somehow during the off-season, it found a digital projector.