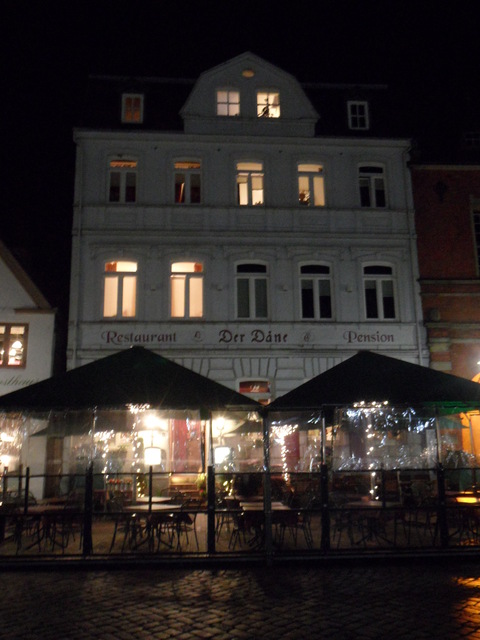 I visited Gluckstadt briefly in September 2013 when some friends and I stopped there for an evening meal. Naturally I asked whether there was a cinema in the town and, by an amazing coincidence, the hotel/restaurant right next door to our Market Square restaurant had been the town’s cinema until as recent as 2012! I believe the cinema was in a building behind the existing hotel, but problems with translation, and the late night darkness, prevented further exploration. Subsequently checking the internet I found a page devoted to the Stadttheater Lichtspiele which contains postcard views of the cinema, with its entrance to the right of the front of the hotel.

The cinema was opened, with 500 seats, on 5 September 1906 by Adolf Ledtje. It is unclear whether the auditorium was built for the cinema, or was a conversion of an existing building. In 1931 “The Love Waltz” was the cinema’s first sound film. Around 1950, John Ledtje and his sister Wilma took over the management of the cinema then, from 1967 to 1984, it was run by Karl-Heinz Ewald. In 1974 scenes for Wim Wenders’ “Wrong Move” were filmed at the cinema, which by now had 389 seats. On 26 August 2006 the cinema celebrated its 100th Birthday with the movie “Blues Brothers”, but then closed, due to lack of an operator, until 10 November 2006, when Oliver Bachmann reopened the cinema.

However, closure came again in June 2012. A reopening was announced in December 2012, but safety issues apparently prevented this and the cinema is believed to have closed permanently in early-2013.

The web page referred to is: http://allekinos.pytalhost.com/kinowiki/index.php?title=Gl%C3%BCckstadt_Stadt-Theater