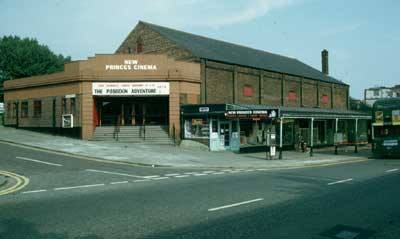 Located in the Monton district of Eccles, today part of Greater Manchester. The Princes Cinema was opened on 23rd July 1928 with Gilda Gray in “Cabaret” and Wallace Beery in “Casey At the Bat”. It had a corner entrance, which was faced in cream tiles. The proscenium was 28 feet wide, the stage 10 feet deep and there were two dressing rooms. There was an arcade to the right of the building which contained a tobacconists shop, a bicycle shop and a café.

The Princes Cinema was equipped with a British Talking Pictures(BTP) sound system in 1929, and the first talkie to be shown was Clive Brook in “Interference” on 11th November 1929. During the previous week, local residents had to listen to the continuous sound of gramophone records as the staff made sure that the sound quality and level was correct. In 1940, it was equipped with a Duosonic sound system.

The Princes Cinema was damaged by a German bomb in December 1940, and was closed while repairs were carried out, re-opening in March 1941 with Spencer Tracey in “Northwest Passage”.

In 1967 plans were proposed to convert the building into a garage/workshop, but these were refused. The cinema was redecorated and modernised in 1970, reopening as the New Princes Cinema and it re-opened with Barbara Streisand in “Funny Girl”. The New Princes Cinema was closed in 1984 with “Greystoke - The Legend of Tarzan”. It was demolished in 1985 and a block of retirement housing named Princes Court was built on the site.