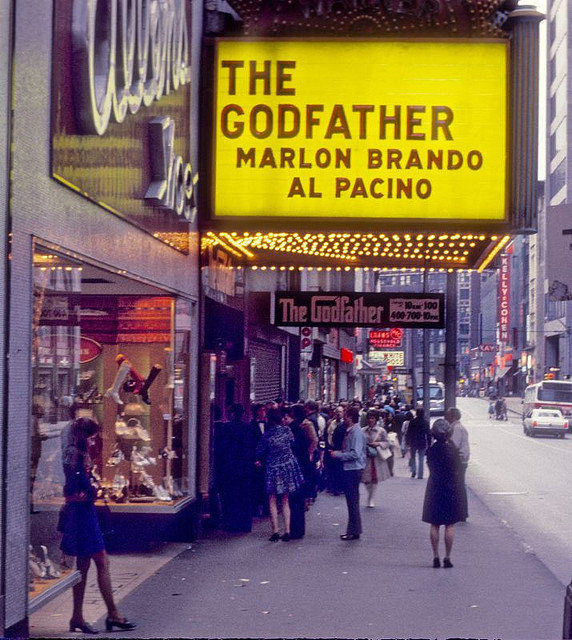 This beautiful movie palace was a major theatre in Pittsburgh. It opened as the Grand Theatre on March 7, 1918 with Douglas Fairbanks in “Headin' South” and Winifred Westover in “Her Husband’s Wife”.

Renamed Warner Theatre on January 2, 1930. From October 1953, it was converted into a Cinerama theatre. It showed many of the reserved seat engagements during the 1960’s, such as "Ben-Hur," "The Alamo," "Exodus,".

The elaborate interior was primarily beige with deep red carpeting and curtains. Its large marquee posted huge mylars on its side, depicting the poster artwork for the current film. This made the theatre a special focus in the downtown center, especially at night.

The theatre was later left to deteriorate. I remember an article in the 1980’s about a poor woman who was hit by a portion of the ceiling while watching a film. Not long after, the theatre was closed on April 14, 1983 with a special benefit premiere of Jennifer Beals in “Flashdance”.

The auditorium was demolished, and a two story shopping center named Warner Center was built on the site. Today you can see the beautiful doors and a portion of the huge lobby which was retained.

I used to work at both the Warner and the Chatham in the early 1980’s. I will be adding some pictures soon of both of these great old theatres, along with the other downtown movie houses. I also have some old photos of the Greater Pittsburgh Drive-In I will be adding.

again WarnerChatham, great shots. Sad to see the pacman and other early video games in the lobby,a sign of things to come

The Warner Theater was much bigger than what the public saw. There were secret passageways, a huge basement under the auditorium, and dressing rooms behind the stage. There were also three adjacent floors of an abandoned department store called “Frank & Cedar”, which I believed closed around 1960.

Part of the Warner Marquee had lights that no longer worked. There were a set of spot lights mounted on the side of the building that lighted the side of the marquee at night. The ushers had to go turn on a set of lights for the marquee that were known as the “Frank & Cedar” lights. The switch for the lights was in the first floor of the Frank & Cedar room, which was on the same level as the balcony. Going into the Frank & Cedar rooms were like stepping back in time. There were old style light fixtures, an old elevator, wood floors, and carved patterns on the walls. The first floor of the Frank & Cedar rooms would later be used for the food court of Warner Center.

To gain access to the huge basement under the auditorium, you walked down a stone set of spiral steps, sort of like being in a castle. The steps were adjacent to the stage behind the curtain. When you came into the basement, there were markings on the wall giving the water level of the 1937 St. Patrick’s Day flood in Pittsburgh. There were also “fallout shelter” items, like food supplies and water containers. These were probably left over from the “cold war” of the 1960’s. The basement is where the controls were for the heating and air conditioning. There was also a set of steps that led into the old Forbes Avenue box office, which had been long abandoned.

I saw many films here, THE WAY WE WERE. EARTHQUAKE, DRUM

Joe Vogel, the article states that the Warner Theater started out as the Grand.

I would have loved to go the Warner when it was open. Can anyone confirm that the theater is haunted?

I saw a lot of movies at the Warner, mostly first-run roadshows, from “Seven Wonders of the World,” in 1957, up to “The Exorcist,” in 1973. The Warner was the only theatre in Pittsburgh that had the Cinerama franchise, with the 3-projector system of showing those extravaganzas. So, I saw “The Wonderful World of the Brothers Grimm,” “How the West Was Won,” “The Greatest Story Ever Told,” and “2001” all there. I also saw “Ben-Hur” there many times, first in its original release, in early 1960, and later for its reissue, in 1969. I even saw a re-issue there of Disney’s “Fantasia,” in 1964, which had been stretched out to imitate widescreen. Weird. (Although, that was the last time the good folks at Disney included the original, uncut version of “The Pastoral Symphony,” with the little pickaninny, black centaurette, named “Sunflower,” who was disappeared from the next reissue, in 1970, and whose existence the studio has more or less disowned ever since. But that, as they say, is another story.) I still recall the long lobby connecting the street entrance to the Warner auditorium, where you entered in about the middle of the audience, and had to walk to your left to get up to the back of the downstairs seating. I miss all those movie palaces of yore!

StarryGreen: Yes, the description now states that the Warner opened as the Grand Theatre, but it didn’t say that at the time I asked the question. When I first visited Cinema Treasures I wondered why so many comments just repeated things that were already stated in the theater descriptions, but it turned out to be the other way around.

The descriptions are periodically updated by the site’s editor with new information that is posted in comments, such as K2’s reply to my question, confirming my suspicion that this house was once the Grand. Be sure to check back now and then to see if something new has been discovered about the theater.

2005 Pittsburgh Post-Gazette piece on the Warner.