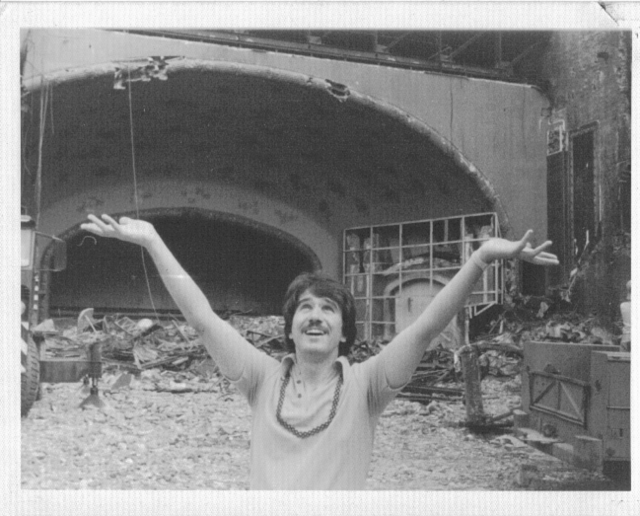 This downtown theatre opened as the Victoria Theatre, probably designed as a legitimate theatre. O September 1, 1913 following a remodel to the plans of architect John Eberson it continued as the Victoria Theatre until 1920. Then it became the Sam Shubert Theatre from about 1920 to around 1927, suggesting that it was almost certainly a legitimate theatre during these early decades.

It was the Loew’s Aldine Theatre from September 17, 1923, through 1934. The switch from Shubert to Loew’s strongly suggests a shift from legit to moviehouse. In 1939 it became known as Loew’s Senator Theatre, but sometime between then and 1950, the John P. Harris circuit purchased the theatre and modified the name to the (Harris) Senator Theatre. It played some second-run features, generally in double feature programs, but most often the Senator Theatre picked up ‘moveover’ movies directly after the completion of their first-run engagements at the nearby John P. Harris Theatre, the flagship of the Harris circuit.

To maintain the continuity/identity of major national touring companies in Pittsburgh, the Harris Senator Theatre changed its name to the (new) 1,760-seat Nixon Theatre in 1950. For the next quarter of a century, it functioned as the primary legitimate Pittsburgh theatre for touring shows beginning with “Oklahoma” September 4, 1950. Henry Fonda came in “Mr Roberts”. The dozens of other live productions included “Darkness at Noon” with Edward G. Robinson, “Bell, Book and Candle” with Rosalind Russell, “Gentlemen Prefer Blonds” with Carol Channing, “Call Me Madam” with Elaine Stritch, and “Porgy and Bess” with William Warfield, Leontyne Price and Cab Calloway. Plus Bette Davis in “Two’s Company”, Julie Harris in “I Am a Camera”, Helen Hayes in “Mrs. McThing” and many others.

Though an occasional movie slipped in, the Nixon Theatre didn’t begin a recurring policy of roadshow films until “Guys and Dolls” opened in late-January 1956 and stayed for 10 weeks. From then onwards, theatre and roadshow movies opened in alternating waves. “Lawrence of Arabia” had played for just four days of its third week in 1962-3, when the Nixon Theatre suffered a fire. ‘Lawrence’ moved over to the Fulton Theatre a couple of weeks later to resume a reserved-seat engagement, but the momentum was lost, and it lasted just seven more weeks.

Stage plays continued to turn up at the Nixon Theatre, but more and more the balance of the theatre’s schedule was given over to movies. The theatre’s subscription base for plays, so often interrupted for long stretches of movies, eroded over the years. By 1974-75, subscribers had become very wary of an extremely irregular play schedule, with promised productions being cancelled and name players backing out of tours. Business was terrible. The shows that came in were small and tacky.

The Nixon Theatre was closed in November 1975 and was levelled. It became a surface parking lot. One distinctive feature of the exterior in its later years had been a marquee that stretched over an alleyway adjacent to the theatre. The original entrance was a tall side of the building level with the auditorium with a simple, but fairly detailed Classic style façade; this was later replaced with a one-story small entrance with the above mentioned marquee.

I have a theater program from the Loew’s Aldine for the week of March 9, 1925. They have a concert orchestra playing some music, and a couple of musical soloists. They are showing a newsreel, Felix the Cat in Felix Tries to Rest and the M-G-M feature The Great Divide.

Hold on to the Loew’s Aldine program. It is really rare.

never saw a film here , but I did see one of the last legit shows to play the theatre. It was a production of Sabrina Fair, around 1975 or 1976. The theatre was quite empty the night I saw the show. Was quite sad when they tore it down.If I recall correctly the space sat as a vacant lot for a long time

Apparently the ALDINE vertical was removed in 1936 or thereabouts.

It is interesting that the building that is above and to the right of the theater’s marquee in both photos (essentially surrounding the theater’s entrance) is gone in the photo posted by lostmemory on October 29, 2005, and that a vertical sign reading NIXON was installed on the beveled face of the building across the street (to which was also attached the left end of the later alley-spanning marquee).

There are some photos posted within some earlier comments of the building that has the vertical NIXON sign on it indicating that that building was the theater, but the theater was really across the alley.

Ed Blank’s extensive and wonderful article, “What Happened to All the Old Theaters?” was in the Sunday, July 10, 1983 issue of The Pittsburgh Press. I still have the paper, although it is getting rather ragged 30 years later! But that is the date for those who have access to microfilms or if that day’s paper is available on Google News Archives.

Article that RSM 3853 is talking about is at http://news.google.com/newspapers?id=aagcAAAAIBAJ&sjid=E2IEAAAAIBAJ&pg=7073%2C3502319

It was 50 years ago today that “The Sound of Music” premiered at the Nixon. With a reserved-seat run of 106 weeks, it’s almost certainly the long-run record holder for this venue. (Anyone know of something that ran longer?) It was one of ten runs in the United States and at least 24 globally that ran the movie continuously into a third year. 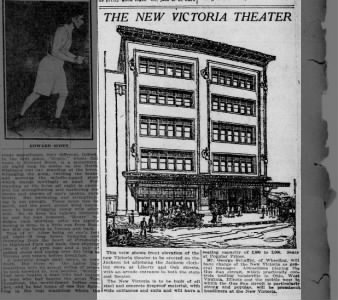 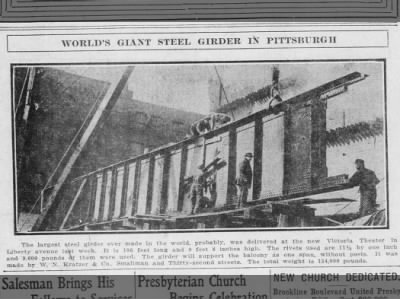 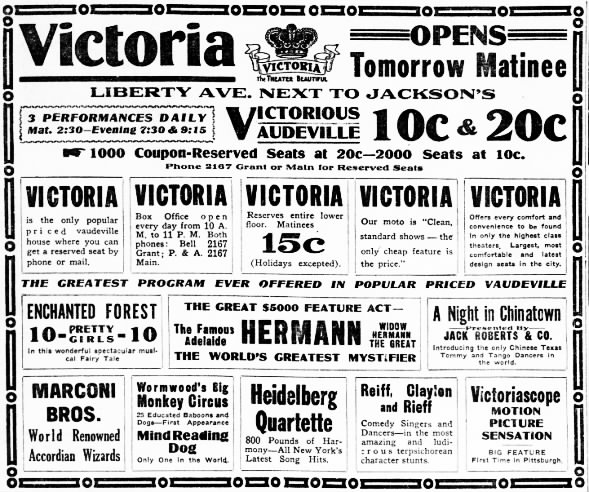