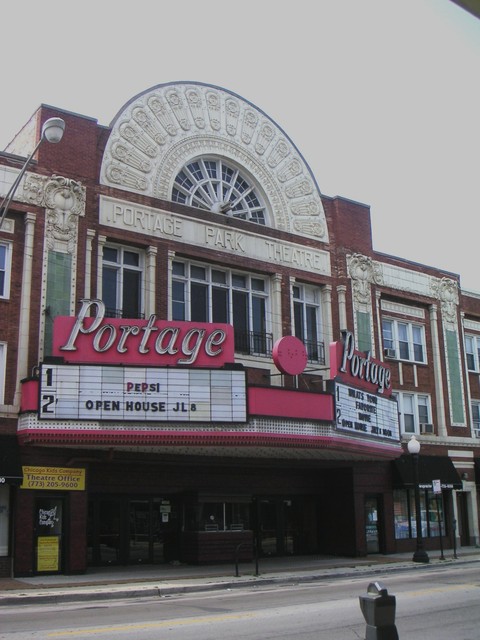 Opened December 11, 1920 with Jack Pickford in “Just Out of College”. The Portage Park Theatre (the former name is still inscribed over the Neo-Classical style facade), was the first theatre built specifically for movies (and not vaudeville shows) in the Portage Park neighborhood of Chicago. The theatre was built for the Ascher Brothers circuit and originally could seat nearly 2,000. By 1929 it was operated by Fox Chicago.

The Portage Theatre remained a popular fixture of the neighborhood for decades, becoming a second-run movie house in the 1960’s. In the 1980’s, its auditorium was divided in two by putting a wall down the middle of the auditorium.

Oddly, after the box office stopped being used, tickets were then sold in the lobby off a table and folding chairs set up school bake sale style.

The Portage Theatre was shuttered in 2001 after operating sporadically for the previous couple years. The theatre was restorated and renovated, and reopened in the spring of 2006 as a single-screen, 1,300-plus seat theatre featuring both silent and sound classic motion pictures and other events, both on-screen and live.

Ah thanks, will do.

It appears they will be closing in February 2018.

Anything new happening at the theater?

Not as I can see. Their website just reads “Coming Soon” on a black screen, and their Facebook page has been inactive since May when it was advertising the Patio Theatre’s events.

Just added the 1929 newspaper ad to the “Photo” section. Thanks for the info.

Added new picture in picture section showing ghost sign on the rear wall of the theater building from the alley.

Today is its Centennial birthday.

In its heyday, the Portage Park Theatre was a place for live music, theater shows and cinema events and a community anchor for school ceremonies, events and graduations.

Dennis Wolkowicz, a Northwest Side native and owner of The Silent Film Society of Chicago, and a co-owner took it over in 2005 and renovated the auditorium and lobbies, and he removed drywall that had divided the auditorium into two rooms.

The theater became known as a premier screening room for independent filmmakers who could not afford to book their shows at other theaters, Wolkowicz said. “We’d have up to 1,000 people for the silent film events,” Wolkowicz said. “That was pretty incredible.”

Eddie Carranza took over the theater in 2012 but sold it to an investment firm in 2016 after plans to revive it never materialized. The theater held shows until it closed in 2018.

Wolkowicz is hopeful the building can be preserved and it can again offer artistic opportunities for people looking to grow and uplift the community. “Once it’s gone, it’s gone,” he said. “This was a unique theater — it was a transitional theater before [artists] went into the big-scale movie palaces … .”

Becky Mocarski, a teacher and manager at Wildlight Yoga Studio in the Portage Lofts across from the theater, wants to see it reopen as a community space to offer cross-business partnerships for events. Its attraction would help small businesses along the corridor and increase the area’s economic stability, she said.

“If it’s drawing people to the community. … it would give that opportunity to see other businesses in the area,” Mocarski said. “Community-based, up-and-coming shows — if that could come back on a small level, the community and neighborhood would fully support that.”

Gliksberg envisions national music shows in the main auditorium that could draw 250,000 people a year, like the Aragon Ballroom in Uptown. Upstairs, he wants to provide a stage for those up-and-coming local musicians, with a similar vibe to Double Door in Uptown and Gallery Cabaret in Wicker Park.

He hopes the space can be a gathering hub for neighborhood events such as movie nights, farmers and artisan markets, holiday events and arts workshops.

“This is a passion project and something I want to do for the community,” he said. “Success means being able to create what 15-year-old me always dreamt of and sharing that with a community.”

Repairs are inching forward on the long-closed Portage Theatre, part of an ambitious, multi-million-dollar plan from its newest owner to revive the iconic venue. Owner Manuel Gliksberg said he has invested $1 million and navigated financial and legal difficulties, and he needs support from the city if he’s going to reopen the landmarked theatre. The extensive renovation will cost at least $10 million, he estimated. The theatre closed in 2018. Gliksberg, an investor who owns a real estate company, bought it later that year.

Gliksberg said he wants “to make this a forever space for the community,” but the building needs costly upgrades so it’ll have more bathrooms, be up to code and to be ADA-compliant, among other things. Gliksberg applied for a city grant to finance some exterior work with help from local officials, but it wasn’t approved. He’s also had to fix a taxing dispute and resolve building code violations, all of which have slowed his progress, particularly during the pandemic, he said.

Neighbors have long waited for the theatre to reopen. Gliksberg said he wants to inject life into the Six Corners shopping district to spur economic development and reawaken the community anchor, but said there’s only so much he can do with private financing. He said he’s willing to put a significant amount of his own money into repairs, but city funds are also needed for the project to make financial sense.

The Portage Theater closed as a cinema in 2001 after operating almost continuously since its debut in 1920. Gliksberg is the third person to take over the space in the past two decades. Soon after, Gliksberg was told he owed thousands in back taxes from the past three years. Those charges have since been taken care of and paid, according to Gliksberg and Cook County property tax portal.

In 2021, the city sued Gliksberg for building code violations involving exterior wall repairs, gutters and downspouts. City records show those violations are pending, but Gliksberg said a city inspector came to the theatre to sign off on the repairs. In the meantime, Gliksberg said he’s invested about $1 million in fixes to the building, including repairs to the exterior roof and rear façade, city records show. He also has done tuckpointing work on all of the exterior walls of the lobby and auditorium, replaced the roof membrane of the auditorium and put in new gutters and downspouts, he said.

Hoping to help Gliksberg push forward with more renovations, the Six Corners Chamber of Commerce applied for an Adopt-A-Landmark grant for the exterior façade last summer. The group sought $242,300 from the city as part of a five-phase revitalization project to fix and replace terra cotta on the nameplate and monumental arch of the theater. Funds were also requested to repair brick issues that have been safety concerns along Milwaukee Avenue.

The city’s Department of Planning and Development, which oversees the grant program, denied funding in January. City officials said Gliksberg did not yet have a comprehensive exterior and interior rehabilitation plan for making the theatre ready for occupancy, and he still owed taxes on the building. Andy Pierce, the theatre historian and chamber member who helped compile the grant application, said the chamber is on board to help Gliksberg apply for more government funding to complete needed repairs.

Gliksberg also wants to apply to use Portage Park Tax Increment Financing district funds for the project. Funds from the tax pool could be used to fix the signs, arch, interior plaster walls, ceilings and HVAC systems. The Portage Park TIF has about $6.5 million for 2022, according to the department’s financial overview. But that money expires at the end of the year. Planning department spokesperson Peter Strazzabosco said there is a lengthy approval process and it might be too late to process an application that hasn’t been submitted. Any uncommitted funds in the TIF will be returned to the appropriate taxing bodies when it expires, Strazzabosco said. “While TIF can provide some flexibility for certain eligible costs, either as a grant or a loan, the district will expire before the proposed terms could be reviewed, approved, closed and the costs incurred. The city is not aware of a formal plan or project for the building, and there’s not enough time for TIF to be used for a proposed project that wasn’t substantially moving forward by now.”

Gliksberg said he hesitated to apply for TIF funds during the height of the pandemic, when the future of live music wasn’t clear and when it was difficult to contract construction workers, architects and inspectors to determine the work needed on the theater. Even with limited time, he said he’s willing to put in money to draft a comprehensive site plan, hire consultants and architects to help carry out his vision. “I will take this gamble and spend the $600,000-$700,000 to bring in all the consultants and get the TIF money with the hope that the city sees how important this project is for the community, but now we’re up against the clock,” he said.

The chamber is hopeful TIF funding for the Six Corners area, even if the theatre doesn’t receive any, can be hurried through the finish line before it’s too late. Chamber President Michael DiMeo said Ald. Jim Gardiner (45th) and planning officials support using the money as soon as possible. “We have to push now. We, as business owners that have paid in, this is that rebate coming back to you that we want to see reinvested.”

Gliksberg also plans to apply for a grant from the Chicago Recovery Plan, which gives small grants up to $250,000 and large grants up to $5 million to developers, property owners and entrepreneurs. Strazzabosco said Gliksberg could also apply for property tax incentives that reduce the tax rate for 12 years and Pace financing for certain energy efficiencies to expand his chances of getting governmental assistance. Pace is a program by The Illinois Energy Conservation Authority that enables commercial property owners to obtain long-term, fixed-rate financing for energy efficiency, renewable energy, water use and more.