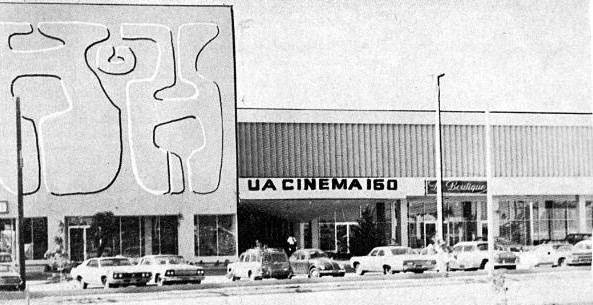 Located in the Laguna Gardens strip mall, this theater opened with a lot of fanfare in 1971. It’s first movie was “The Andromeda Strain”. It boasted that it was the most up to date, modern theater in the island. Its main screen had a Todd-AO-150 system. This theater became THE place to see many epic films. It originally seated 1,000, then became a duplex, then more small screens were added.

Somewhere in early 1980’s the theater started to gain a reputation for attracting an unruly crowd. Like in the UA owned Paramount, the administration cared very little about the comfort of people who wanted to have a civilized, orderly experience while attending a movie. So many people started avoiding the Cinema 150.

In the late 1990’s, Caribbean Cinemas bought all UA theaters in Puerto Rico. They tried at apply its good standards to the Cinema 150, but it was too late. People would rather go to the nearby Plaza Carolina theaters and the Cinema 150 was closed in late-2002.

I was hired to work as a projection technician for the United Artists Projection & Sound Dept of Rhode Island New York in 1987..The theatre was constructed circa 1968-69 as a standalone cinema and later four small auditoriums where added next to the original D-150 installation.

The booth originally was equipped with 2 Norelco Phillips Dp-75 35-70 projectors, Ampex magnetic 6 channel sound eqipment including the mag preamps and a later Dolby-CP-200 was retrofited in the sound Rack to process the Dolby formats of the day..The Ultra 360 sound was a home made gimmick wich consisted of magnetic cue tapes provided by the projectionist at the moment of preparing the rells for projection so that he could choose or say pre set the speakers on the back of the cinema wich where originally installed as Sensurround to deliver some kind of rumble or impact on the listener..Also it had 2 awsome! “all purpose projection controls” designed by Joe Kelly >>The Ua 150 was designed so that up to 4 different aspect ratios could be projected in 1:33(undersized Flat)/1:85 reg Flat/2:35 Scope/and 2:21 70mm D-150. As for D150 70mm is concerned the screen was a 69 ft wide with a height of 26 feet and a curvature ratious of 120 degrees..It looked beautiful in 70mm..
the lenses for it where a pair of Super Curvulon D150 Kollmorgen lenses and the screen was a teknikotte lenticular type.. The seating capacity was 950 seats..The proj throw was 104 feet from aperture to center of screen..

Later,..
When we upgraded the 150 to Cp-55 the speakers where then reconnnected to function as subwoofers and the Ultra 360 was dissabled and no longer needed since the Cp-55 would provide a newer and stronger quadraphonc effect along with the surround sound and the addition of more reliable sound amplifiers QSC in this case..during this period United Artists in Puerto Rico thought there was no need to bring more 70mm prints to the island and so it remained that way untill UA sold it to Caribbean Cinemas. During the life of UA 150 with Caribean , I participated in the last retrofitting and upgrade wich was acomplished with TVP’s Richard Fowler , technician Allison De Faria and myself. At that moment we re upgraded to DTS sound capacity, Sony SDDS capacity , and CP-500 Dolby Digital capacity along with newer Eastern American Sorround speakers on the sides and newer HF Horns wich could displace the HF signal in a more wider angle still preserving the old Altec Speaker Woofers wich where marvelous ..Obviously more powerful QSC amps where added a plus a pair of subwoofers amplified at 1200 w.

I was fortunate to participate in the life of the D-150 but its a sad memory to realize that no more 70mm was going to be shown with full blown screen open at its max.

By the way I lived 10 mins from the UA 150 and since I was younger that was my kind of movie experience !and Its very true It opened in 1971 with fanfares!Although the building of Laguna Gardens Shopping beggan its construction around 69..I use to ride my byke near by the LAguna bridge,,I saw many films in 70 mm Star Wars , Patton, Quest for Fire,2001 A Space Odyssey//

Anyone has pictures of this theater?

Went in Puerto Rico for vacation I never had the chance to attend this theater but I do remember it because it always ran the best movies of those times sorry to hear is closed.

Here’s an article that I found on its opening, with some pics!!:

Thanks for the posting! The photos and the article bring back wonderful memories. The “semi-abstract” art that covered the walls of the auditorium added a classy touch of modernism. There was also a rather large rectangular billboard facing the Baldorioty de Castro Avenue, which was erected around the mid 70’s, and was used to advertise the major attractions at the theater. Some of the designs in the billboard were rather elaborate and impressive, such as the ones for “Gandhi” and “Return of the Jedi”. By the way, the line to see “Return of the Jedi” on opening day was something else!

Those were the days!
JSA

From what I’ve noticed, the nearby Plaza Carolina theaters is closed. Caribbean Cinemas took over every theater on the island and bought out rival CineVista theaters. The only theater active in the Carolina area is Los Colobos. With no theaters in the Laguna Gardens area or nearby Plaza Carolina, this would be a great chance for someone to revive the Cinema 150. The location is still perfect with the airport nearby. Any motions from anyone trying to revive it? This would be the perfect time to do it.

BONUS!!! Here are pictures of the Cinema 150 as it looks today. These were taken by a real estate agent who is looking for tenants to occupy more of the shopping center’s empty spaces. The theater’s classic facade is now eclipsed by a giant billboard. Enjoy:

My first movie ever was at this theater: Midway. I would love to see pictures from the inside. Bring back those great memories.

I remember when Earthquake came out in 1974. I was 9 and I was amazed with the size of the screen,when I was used to conventional theater size. Then came on the movie,the sound…the rumble of the earthquake that everyone felt in their seats. It was awesome!! Now is closed and waiting for rent,what a waste.