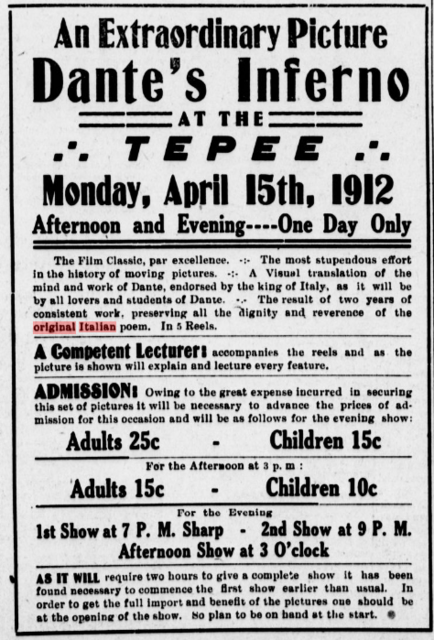 The Tepee Theatre was already operating in 1908. The theatre closed on November 10, 1917 and the building was converted to retail use in 1918.

The Tepee Theatre was mentioned in the August 17, 1918, issue of The Moving Picture World:

“Red Cloud, Neb. — Geo. J. Warren has again come into control of the Teepe [sic] theatre here, as well as the Orpheum.”

411 N. Webster is the address of the Red Cloud Opera House, so 413 must be either the storefront on the ground floor of the Opera House and to the right of its entrance, or the building immediately north of the Opera house. I can’t read the addresses in Google’s street view at this location.

Orrin W. Taber, already known for his pool hall, outfitted the first electric theatre in downtown Red Cloud in 1908. Credit Miss Ella Cook who won Taber’s “name the new electric theater contest” with her suggestion of “Tepee.” The Tepee launched on a ten-year lease on March with illustrated songs sung by Frank Wick, a short film, and a live act. The theatre went out of business on November 10, 1917 with screenings moved to the Orpheum which was doing vaudeville mixed in with films.

M.N Garber took over the store for his paint and wallpaper store in September of 1918.