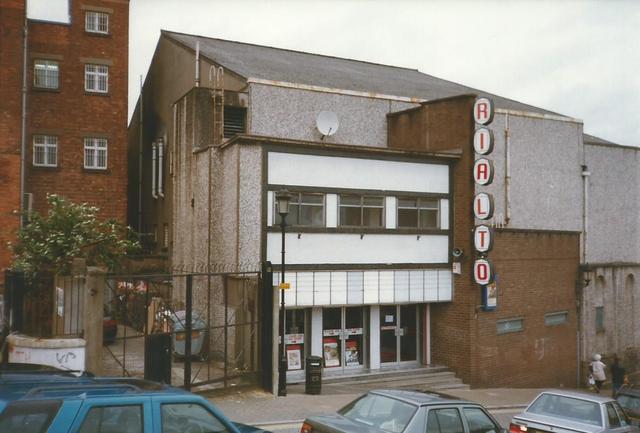 Located in Londonderry, County Londonderry. The Rialto Cinema opened in 1918 with a seating capacity for 800. It was taken over by the Union Cinema chain in September 1936. They were taken over by the Associated British Cinemas(ABC) chain in October 1937. The proscenium was 22 feet wide and the stage was 17 feet deep. There were four dressing rooms.

In 1959, the Rialto Cinema was partially demolished to build a new ABC cinema on the site. With a seating capacity of 1,166 in stalls and circle levels, the ABC opened on 4th June 1960. It was designed by architects C. ‘Jack’ Foster, Alan Morgan and Berry & Miller. Sold to an independent operator in 1976, it was re-named Rialto Cinema again. Closed as a full-time cinema in 1983, it was taken over by Derry City Council in 1984 and was re-named Rialto Entertainment Centre. Stage shows and films were included in the programming.

It closed in August 2001, and was replace by the Millenium Forum Theatre on the adjacent street. The Rialto Entertainment Centre was demolished in 2006 to form part of a new shopping centre.