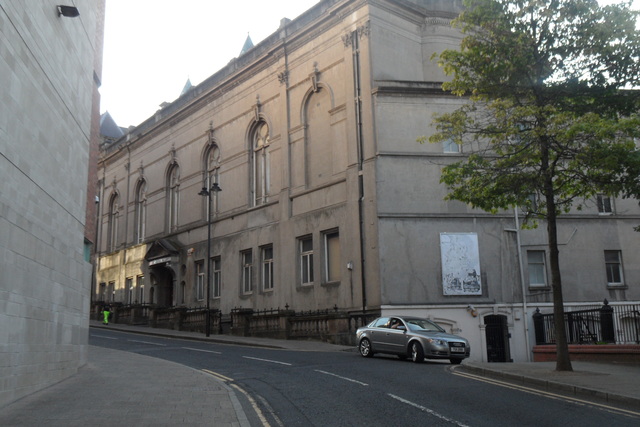 In Londonderry, County Londonderry, the Orchard Cinema, in St. Columbs Hall, is listed in the British Film Institute Handbook for 1998 as having two screens, with 700 and 132 seats. Indeed, during my visit to the city in November 1998, films were being advertised at the cinema. But it is doubtful that they are still being shown.

The rather limited St. Columbs Hall website says, intriguingly, that “For over a century St. Columbs Hall has been at the heart of the city of Derry/Londonderry. In 2013, the heart will dance to a different beat, one which will move the entire city”. This indicated the Hall is undergoing rebuilding/refurbishment and itr reopened as a convert venue & banquet hall.

Columbs was opened as a temperance hall in 1886 and was listed for film exhibition in the 1920s, although screenings have been somewhat on-and-off. Ian Dury & The Blockheads and Frank Carson are known to have appeared in the hall itself. The Magic Lantern Film Society set up by Alessandro Negrini started showing films in December 2007 starting with the Michael Moore documentary ‘Sicko’. The church sold off the building to the Garvan O'Doherty group in 2012 to overcome debts, and the main hall has become a banqueting centre and concert venue. There is nothing to suggest that films have been screened in the cinema since.