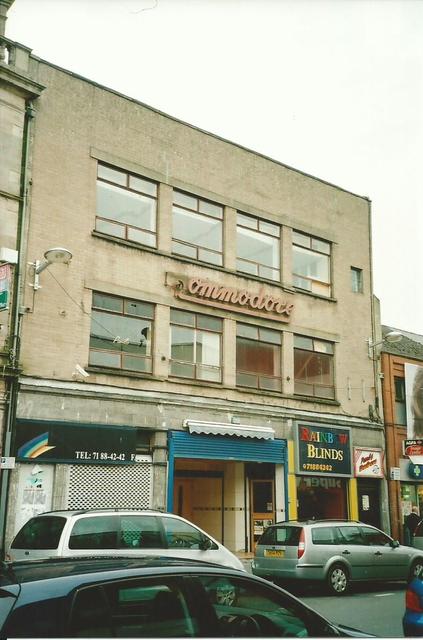 In Strabane, County Tyrone, the Commodore Cinema was opened in 1935 and operated by Wilton and Barry, who also operated the towns' 500-seat Palindrome Cinema (which was listed as closed in 1937). By the 1953 edition it was being run by Commodore Cinemas (NI) Ltd., same in the Kine Year Book for 1966. It was closed on 1st January 1972.

It reopened as a ‘studio cinema’ with the building also containing a pool room and billiard hall. It suffered a fire in August 1981 and the cinema reopened on 20th March 1982, but this was short lived as it closed in July 1982.

According to an article in the ‘Derry Journal’ in July 1998 the Commodore Cinema closed “over a decade ago”. It is now (November 2013) Commodore Bingo and Amusements. Regrettably, there is nothing inside to indicate the building’s cinematic past. (My photographs were taken in September 2008.)

Opened 1935, closed 1 January 1972, empty as of 1977. Reopened December 1978 as a studio cinema, pool room and billiard hall. A fire occurred in August 1981 but cinema reopened weekend of 20 March 1982 with ‘Stripes’ ‘Arthur’ and ‘Snow White and the Seven Dwarfs’,perhaps with additional screens,and closed in July 1982. Owners said to be the Dolan Brothers. Proposals included plans for a civic centre but still seems to be operating as a bingo-hall as indicated in the overview.