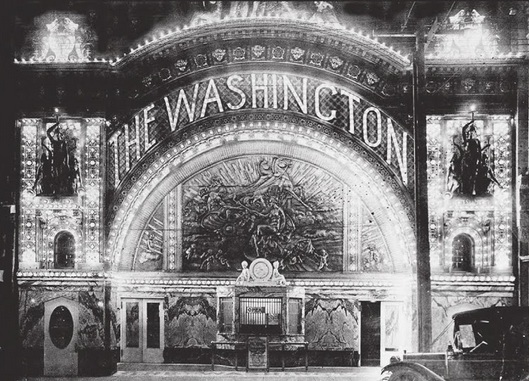 Nevills opened the Washington Theatre as Dallas' first movie palace built for photoplays on Thanksgiving Day, 1912. The Hellenic Pantheon design with bronze and marble goddesses overlooking the box office, designed by R.A. Bennett of Chicago. It was said to be the first showplace of the south and one of the finest at that point of time in the United States. 2,000 lights on its exterior and Bennett’s mural frieze “The Spirit of Knowledge” was said to be the first original mural for a photoplay house.

The idea turned out to be good, so Nevills renewed his original 5-year lease for 10 more years. But with competition from the Queen Theatre, Old Mill Theatre, Crystal Theatre, Royal Theatre, Capitol Theatre, and finally the Majestic Theatre, the Washington Theatre seemed old and was downgraded to second-run features and westerns. Nevills closed the Washington Theatre at the end of his second lease after 15 years, on July 3, 1927. The building was bulldozed thereafter.

Dallas movie pioneer and capitalist W.D. Nevills was an innovator with Dallas' nickelodeons with the Candy, Princess, Palace, Empress, Dalton, and Nikelodeon. Nevills decided the time was right to move past the “store-show” concept and project to more people simultaneously. Nevils launched the Washington as the first movie palace built for photoplays in Dallas seating 600 people. It opened Thanksgiving Day 1912 and movie goers must have been impressed by the Hellenic Pantheon design with bronze and marble goddesses overlooking the box office and the large auditorium just past the lobby. The theater was designed by R.A. Bennett of Chicago was said to be finest at the point in the United States. Bennett was well known for designing 10 buildings for the St. Louis World’s Fair.

With 2,000 lights on its exterior, the theater had no marquee probably thinking the lights would be enough to draw a crowd. But with time came competition and a marquee was added to provide current feature information. Inside, Bennett’s mural frieze, “The Spirit of Knowledge, was said to be the first original mural for a photoplay house. Nevills’ idea turned out to be good so he renewed his original 5-year lease for 10 more years. “The Queen of Sheba” played for a full month at top price which had never been done in Dallas. And many thought that record would stand for decades – which obviously turned out to be an incorrect assumption. Other hits were “Connecticut Yankee” and “Over the Hill.”

Design-wise, Bennett and the Washington had style and future competitors took notice quickly. Theaters spouted up and down Elm Street and left the 600-seat Washington in the dust. With competition from the Queen, Old Mill, Crystal, the Palace practically right next door, Capitol and, finally, the Majestic, the Washington seemed small and aging. The Washington was downgraded to second-run features and westerns. Nevills closed the theater at the end of 15 years of leasing on July 3, 1927 as its sole owner. The theater did have a short life with sporadic sermons and speeches after the Washington left. The building was bulldozed thereafter. The Washington’s former spot was home to two long-standing clothing stores but as of the 2010s was even easier to spot as the home of Thanksgiving Tower, the 50-story building at 1601 built in 1982.

A nice story on the Washington Theater.