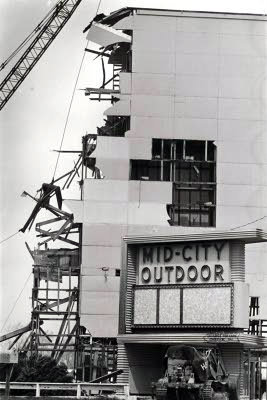 The Mid-City Outdoor opened on April 16, 1949 with John Wayne in “Red River”. It was located between Racine & Kenosha and had a capacity for 765 cars, plus there was seating for 500 walk-up patrons.

Since closing at the end of the 1984 season it was abandoned until it was demolished in September 1991 and condominiums have been built on the site.

Maybe that’s because some other websites keep insisting that the MID-CITY was in Racine. The MID-CITY was in the town of Somers in Kenosha County on Sheridan Road (WI 32, or WI 42 at its 1948 opening), a few hundred feet south of Kenosha County Highway A. Its actual exact numerical address isn’t easily available because the ads just listed the location as “Sheridan Road”, and Somers never had a city directory, and Kenosha’s city directory didn’t extend into Somers. There’s a photo at Wisconsin Theatres www.onelist.com/group/WisconsinTheatres .

The mid-city drive in was located just a little south of Berryville road on Sherdian road next to Berryville elememtary school. I went to school there from 1953 to 1961. We used to sneak in the theater in trunks of cars or climbing over the fense. The owner let us all walk in for free and gather around a speaker to watch the movies. He was concerned about our safety. That was a great time living on the banks of lake Michigan in a place called Berryville!

Approx. address for this drive-in was 702 Sheridan Road.

On the evening the Mid-City Outdoor Theatre opened, WLIP 1050 broadcast the opening ceremonies and the VFW Drum and Bugle Corps performed. The premiere program included “Red River” with Montgomery Clift. The last operator was Standard Theaters, and when a winter wind gust caused the screen tower to list, the town of Somers issued raze-or-repair orders. Standard decided to close before the 1985 season began. On May 1, 1985, the Mid-City screen tower fell to the wrecking ball (along with the neighboring Berryville Grade School) to make way for the Villa Rosa Apartments, but the concession building remained for a few years, open to the winds.

Opening ceremonies were recorded by WLIP for rebroadcast on Sunday from 5:30 to 6 PM with Jerry Golden announcing. Kenosha County Board Chairman Peter Harris met Racine County Board Chairman Martin Herzog to cut the ribbon. Jay Rhodes welcomed the MID-CITY to Somers, and the Kenosha VFW Post 1865 Jr. Drum and Bugle Corps performed. The program began at 6:50 with short subjects including the Popular Science feature “Stocking Yarn”, Screen Song cartoon “Readin', Ritin' and Rhythmatic”, and Warner Pathe World News. The second show began at 9:40.

The second show(on opening night) was the movie “Red River)”.

KENOSHA DRIVE-INS RUN GAMUT OF PROMOTION /// Kenosha, Wis. – The Macy-Gimbel price war and Bill Veeck’s recent baseball circus are “small potatoes” compared with the shenanigans of the managers of two outdoor theatres here. Word has traveled among theatregoers in this city that “you really get your money’s worth at the Mid-City on Highway 42, north of the city, and the Keno Family Drive-In on 42 south of the city. The two managers – William Wallos of Mid-City and Robert Peck of Keno Family – help spread the word in newspaper advertisements, radio announcements, posters, handbills and by sound truck. In addition to seeing a movie, or two movies, or sometimes three movies, the Kenosha patrons have been given wrestling, fireworks, bicycle racing on rollers, and a monkey village to watch. One or the other theatre has offered free cigars, parties, towing and repair service, baby bottle warming and guess-the-star contests. The managers even send scouts across town to see coming attractions at the rival theatres. The Keno scored a first when it presented first-run pictures at no increase in regular prices. Mid-City is close behind, scheduling a back-to-school and Christmas party both in September! Santa Claus himself will be on hand to greet the youngsters who come to the outdoor movie with their parents. Square dancing in front of the giant screens has already been introduced with midnight shows, pony rides, and playgrounds for the kiddies. For example, one of the theatres announced that it would bring a special super attraction to its grounds – a real live monkey village. A day or two later, the other theatre told the children to come and see real live bear cubs! It was the same way with wrestling. (Boxoffice Magazine, September 22, 1951)

The Mid-City Outdoor Is Closed Right After The End Of The 1984 Season, And Left Abandoned Until It Was Demolished In September 1991.