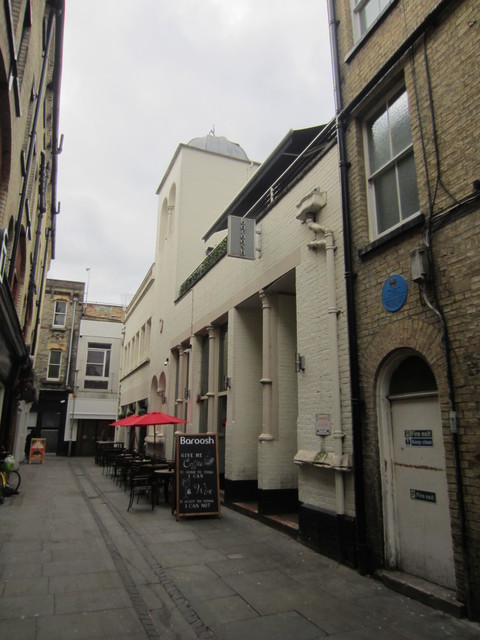 In Cambridge, Cambridgeshire, in 1926, the interior of the 1866-built Central Hall and Conservative Club was gutted by fire. Rebuilt in 1927, the hall was used as a part-time 250 seat cinema, the Cosmopolitan Cinema, from 16th October 1933. It became full-time in 1940.

It had a square-shaped one-floor auditorium with mirror projection from the ceiling. The floor was reconstructed and raked, and it became the Arts Cinema, from 16th October 1947. The accent was on ‘quality’ films, and the Cambridge Film Festival became established there. The auditorium was ‘turned round’ in 1961 and seating increased to 320. A pair of Philips FP20 projectors with pulsed lamps were installed above the seating, again using mirrors. A Philips 16mm projector was installed in 1976 and the pulsed lamps were replaced by Orcon Xenon lamp houses. These were replaced in the 1980’s with more powerful equipment and Dolby stereo was added with a CP50 processor (donated by none other than Ray Dolby, who had been a student at Emmanuel College) feeding Westrex power amps and JBL speakers. Strong Super Lumex Xenon lamp houses were added later.