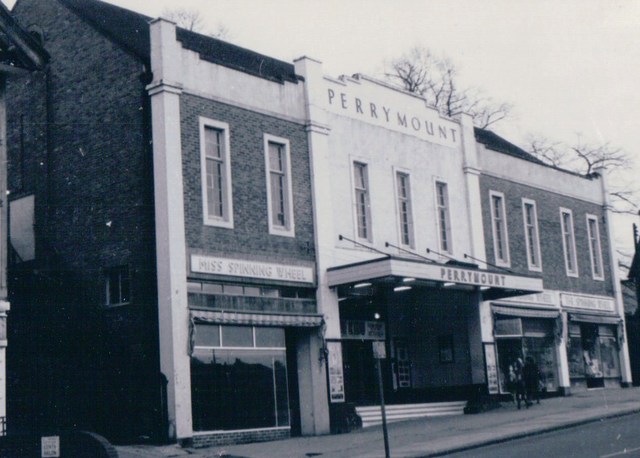 Located in Haywards Heath, West Sussex. The Perrymount Cinema was built for and opened by the independent Mid-Sussex Cinemas Co. on 30th May 1936 with Jack Buchanan in “Come Out of the Pantry” and Tom Walls in “A Cuckoo in the Nest”. Seating was provided on a stadium plan, with a raised stepped section at the rear of the auditorium. It had a deeply curved proscenium, similar to Radio City Music Hall in New York, USA. The Perrymount Cinema also had a café for the convenience of its patrons and a dance hall located over part of the foyer and adjoining shops.

It was taken over by the Union Cinemas chain in July 1937, and they were taken over by Associated British Cinemas(ABC) in October 1937. The proscenium was altered in 1955 when the cinema was equipped with CinemaScope when Alan Ladd in “Drumbeat” became the first film to be screen in that process.

The Perrymount Cinema was closed on 11th November 1972 with Clint East in “Joe Kidd” and “Subterfuge”. There was a local petition which gained 1,000 signatures to keep the building open, but nothing happened. The building stood empty and increasingly derelict for many years, and was demolished in December 1984. By 1996 the site had become a car park for an office block named Sussex House which had been built on part of the site.