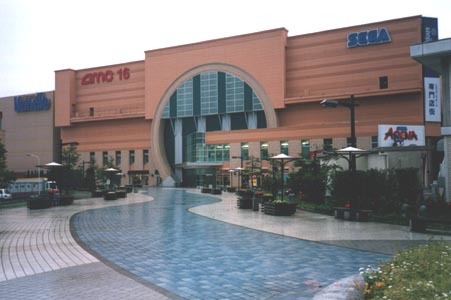 Located in a shopping mall in the city of Nakama, on the island of Kyusha, 500 miles southwest of Tokyo. The AMC Nakama 16 was opened in November 1998. It was taken over by United Cinemas in 2021.

Cinema architect Frank Dagdagan created three Japan theaters and one Hong Kong location for AMC Entertainment International including this entry for the circuit’s second theater in Japan, the AMC Nakama 16. The 16-screen, 57,000 square foot theatre was designed with 2,600-seats and at the time of opening was the largest theatre in Japan. Located at the Daiei-Nakama shopping center groundbreaking was late in 1997 with an opening in November 1998.

The auditorium design gave moviegoers an unobstructed view of the screen and had the AMC LoveSeats with retractable cupholder armrests. All auditoriums will feature Sony Dynamic Digital Sound (SDDS) and the High Impact Theatre System (HITS) with compound-curved screens. The AMC Canal City 13 theatre in Fukuoka, Japan, was the first AMC theater in Japan theater launching in April 1996.

This cinema is now operated by Japanese chain United Cinemas (not to be confused with the Regal-owned United Artists Cinemas). Its current name is United Cinema Nakama 16.