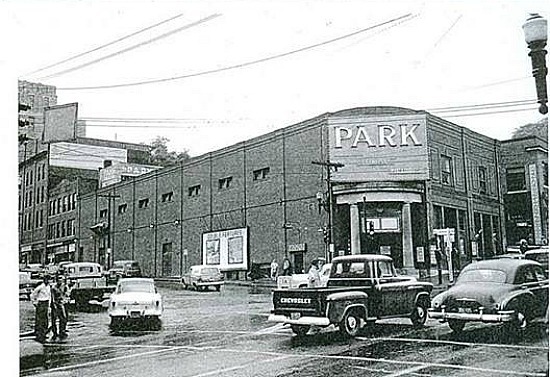 Located on the northeast corner of State Street & Park Street. The Star Theatre was opened on December 25, 1913. It was operated by Pope D. McKinnon, who also operated the Palace Theatre on Exchange Street.

The Star Theatre was taken over by the Keith circuit on November 28, 1914, and was redecorated and renamed Park Theatre. It was still operating in 1919.

Pope D. McKinnon originally intended to name this house the New Palace Theatre, as noted in this item from the July 12, 1913, issue of The Moving Picture World:

“Mr. Pope McKinnon, a real estate dealer, and owner of the Palace Theater, a photoplay house, of Bangor, Me., is finding business very good. On this account McKinnon has decided to give the Bangor photoplay fans a new house that will be modern, up-to-date and thoroughly fireproof. Plans have been made and accepted by McKinnon, calling for a house to seat 1,500 people, built on a lot of land 60 by 174 by 41. The new house will be known as the New Palace and should be ready for its opening by September 15. Arthur Allen, who has been running the Palace Theater so ably in Mr. McKinnon’s interests, will have charge of the new house. Vaudeville and moving pictures will be the policy. Bangor can easily stand a modern theater and the New Palace has every chance to be a money-making proposition. Manager Allen is very popular with his patrons, as he always tries to deliver the goods In the shape of good programs. The New Palace will cost about $50,000.”

But when the new house opened, an article in the January 17, 1914, issue of The Moving Picture World said that it was called the Star Theatre:

“Contrary to the general announcement, the new Star Theater, Bangor, Me., did not open on December 24, for the simple reason that It was not possible to complete it In time. The house seats 1,600, and putting on the finishing touches proved anything but an easy task. A large force of workmen rushed the 1,600 odd seats in, but it took a long time to drill them into the concrete floor. The house opened on Christmas Day, with Mutual films, two singers and a six-piece orchestra. The Star is spacious and comfortable, as the seats are placed far apart, and give a perfect view of the screen from every part of the theater. The walls are light green and the celling is white. A modern system of ventilation is one of the features. Pope McKinnon, formerly owner of the Palace Theater, is the proprietor, and has secured as manager, Howard F. Atkinson, formerly in charge of the Nickel Theater, at Bangor. The entire 1,600 seats are on the ground floor, and good business is anticipated.”

The claim of 1,600 seats was a considerable exaggeration. Other sources, including other items in the same publication, give the opening capacity as 1,200.

An item in the April 18, 1913, issue of the Bangor Daily News said that architect Victor Hodgins was drawing the plans for Pope McKinnon’s new theater at State and Park Streets. The building was a fairly plain brick structure, but featured a corner entrance in the Colonial Revival style.

The Park Theatre operated for several decades, and was a for a considerable time operated by a Paramount-Publix affiliate. I’ve been unable to discover when it closed, but the building was demolished in 1973.

Cinema Treasures Cinemalover found two vintage photos of the Park Theatre on this Facebook page. The upper photo appears to be from the late 1960s or early 1970s, and the theater looks closed. The lower photo is probably from the early-mid 1950s, when the house was still in operation.

Somehow I left a word out of my previous comment. It should start “Cinema Treasures member Cinemalover….” The link was posted on the page for the Palace Theatre, which was previously misidentified as being the same house as the Park.

The Theatre Historical Society archive has the MGM Theatre Report for the Park – Card # 337. Address is 36 State St. There is an exterior photo dated April 1941. Condition is Good. The report says it’s over 15 years old, was showing MGM product and had 1,125 seats.