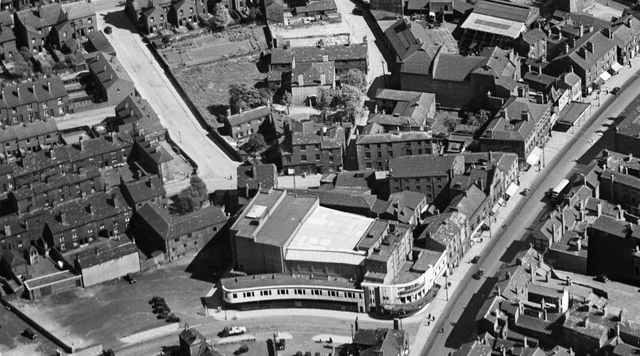 The Empire Theatre opened as a variety theatre in December 1909, and was designed by noted theatre architect Frank Matcham. The foundation stone had been laid on 8th October 1909 by well known music hall star Vesta Tilley. Films were part of the programme from the beginning. The Kinematograph Year Book (KYB) for 1914 lists the owners as Sherwood & Co, and the capacity as 1,500 seats.

New Century acquired the cinema on 25th July 1921 and it was re-named Empire Super Cinema, reopening with “Kismet”. Ownership passed to Gaumont British Picture Corporation(GBPC) Ltd. in March 1928 and it became the Empire Cinema.

In the KYB 1931, the owners are GBPC Ltd. and the cinema is not equipped for sound.

In KYB 1942 the Empire Theatre has British Acoustic sound, is still owned/operated by GBPC Ltd. and has 977 seats. The information is the same in KYB 1947.

The Empire Cinema was re-named Gaumont on 22nd May 1950. The KYB 1954 has the owners/operators as Circuits Management Association Ltd. (formed from the merging of GBPC and Odeon under the Rank Organization).

The Gaumont closed on 30th July 1960 and was demolished. Retail development stands on the site.

In the aerial photo the Gaumont is the building top right with the canopy extending over the pavement. The cinema bottom centre is the Regal / ABC / Cannon which has been shuttered for many years.