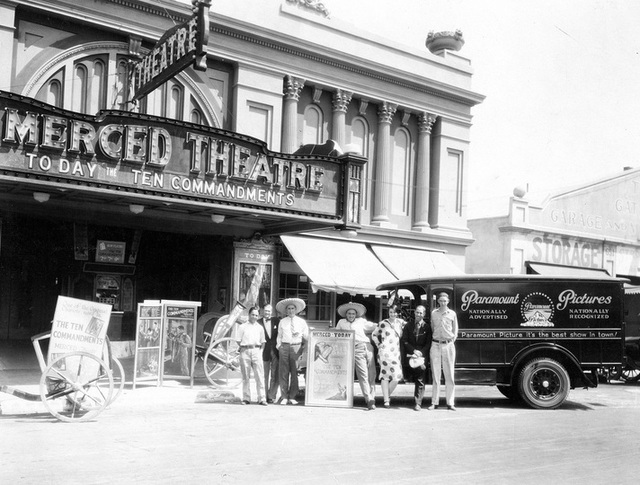 In the 1970’s, when owned by United Artists, the auditorium was divided into three parts and it was called Cinema III. Since Farley assumed ownership two of the auditoriums, which seat 120 each, have been showing art films while the larger 250-seat venue with tables and a balcony has been used for an eclectic array of performing arts. There is also a small espresso bar and deli in the lobby. The theatre was available for rentals. It is owned by contractor Brenda Farley who has been handling its ongoing renovations since 2000. It had closed by the beginning of 2011.

The other historic theatre, the Merced Theatre, is now undergoing restoration for use as a performing arts center. There is also a small playhouse and a 10-screen multiplex downtown.

My friend Jack Tillmany has in his very extensive collection a 1920s color tinted postcard view of this theatre as the Merced. It was unquestionably designed by A. W. Cornelius originally. Its facade bears the design Cornelius used on so many of his theatres. In fact, it most closely resembles the California in Pittsburg, but a bit narrower.

Salih Brothers, currently listed as architects of this theater, operated a general contracting company. However, I can’t find any indication that they acted as architects on any of these projects. The original Merced Theatre, as Gary Parks says, designed by A. W. Cornelius. The application for the inclusion of the second Merced Theatre on the National Register of Historic Places included a bit of information about the first Merced Theatre, saying that it was opened in March, 1920 by Charles Douglas and Francis Egan, and that it was bought by E.H. Emmick, president of the Golden State Theatres circuit about 1923. The first Merced Theatre suffered a fire in December, 1936, and was rebuilt and reopened as the Strand in 1938. It doesn’t say who the architect for the rebuilding was.

Salih Brothers operated at least one theater themselves; The Center in Centerville, now part of the city of Fremont. Salih Brothers build the Center in 1946, and it was operated by the Salih family until 1973. A document from the Fremont planning commission says that the Center Theatre was designed by architect A. A. Cantin. If the Salih brothers had been architects, I would think they’d have designed the theater they built and operated themselves.

This link has 3 photos of the 1920 Merced and 1929 remodel plus a nice article from the Merced Sun. http://www.mercedsunstar.com/living/liv-columns-blogs/sarah-lim-museum-notes/article34097325.html

I know it’s a long shot that you’ll respond after so much time, but I was wondering how you found out when the fire was that destroyed the original Merced Theater? I’m working on a research report on the Mainzer and have only been able to find estimated dates of 1931 of the fire and not December 1936. Thanks!

crogg: The date of the fire came from the NRHP REgistration Form for the second Merced Theatre. A section of it deals with the history of the Golden State Theatre Company, and that’s where the brief bit of information about the first Merced Theatre can be found.

Here is a link to a PDF of the Registration Form.

This article by Sarah Lim, museum director for the Merced County Courthouse Museum, appeared in the September 4, 2015, issue of the Merced Sun-Star and contains a bit more information about the original Merced Theatre. It gives the opening date as March 4, 1920 (the first performance was a live operetta rather than a movie) and says that the theater was destroyed by a fire in December, 1936.

A 1936 date for the final fire does not preclude the possibility of a fire in 1931 as well. Fires were a common hazard of theaters in those days, and many an early movie house suffered more than one in its history. In fact during the era of highly explosive nitrate film stock used in conjunction with intensely hot carbon arc projector lamps, it would be difficult to find a theater that didn’t suffer at least one projection booth fire.

This theatre now has a for sale sign outside. Great marquee still left and the place needs to turned back to a single theatre again.

I’ve also seen conflicting information about the final closing date – was it in 2006 or 2011? Thanks!