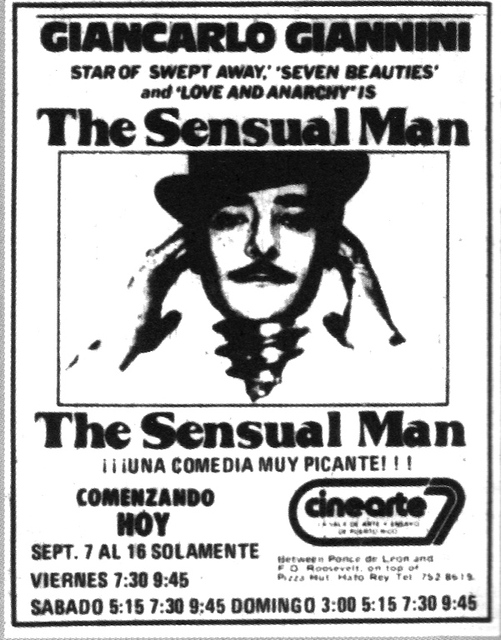 These small theaters were the first in Puerto Rico to specialize in art films. The people who started this theater originally showed films in the Bar Association auditorium on Saturdays and Sundays. This experiment was sucessful and they built Cinearte in the Hato Rey section of San Juan.

The fare who played here was a mixed one. They would show films like “Local Hero”, “Diva” and “Tin Drum”, but when they wanted to make money they would turn to soft core ‘art’ such as sexy Sonia Braga movies. Her movies could play there for months.

During the “Last Temptation” controversy, Cinearte was the only place which showed the movie after chains such as Caribbean Cinemas bowed to religious groups' pressure.

Going to Cinearte was quite an experience. The theaters were small. If someone stood up during the screening, they would block the screen. And the speakers were small and the sound puny. But one must thank Cinearte for finally creating a place to see challenging, serious films.

Cinearte closed down in the early 1990’s and Fine Arts in Miramar took its place in bringing indy and foreign films to Puerto Rico.

The above pic, Dec. 31, is not the Cinearte. It is the Fine Arts in Miramar.

Was Cinearte Demolished or closed?

The description sounds a lot like the Fine Arts… But I really don’t know anything.

Sorry Davsot, but I already had moved to NYC when Cinearte opened. I never knew it existed until I saw it listed here. I don’t know anything either.