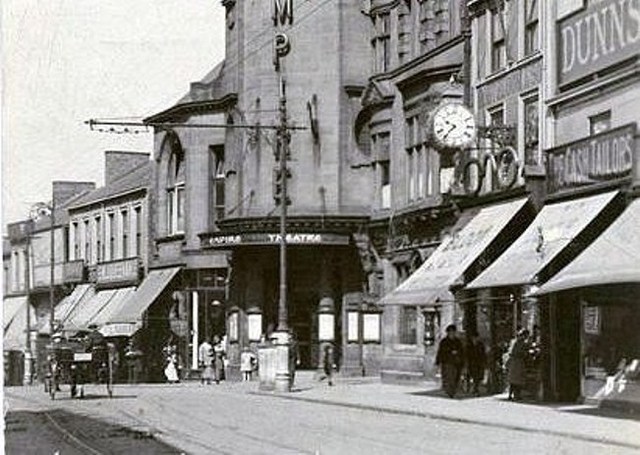 The Sunderland Empire Theatre is located on the corner of High Street West and Garden Place. It was opened was a variety theatre on 1st July 1907 with a bill headed by Vesta Tilley (who had laid the foundation stone on 29th June 1906. Included in the opening programme was the Bioscope showing ‘the latest and most up to date pictures’. The Empire Theatre was built for Richard Thornton, and in 1909 Edward Moss and Oswald Stoll joined in the management of the theatre. Seating is provided in orchestra stalls, dress circle, upper circle and gallery levels, with two large boxes adjacent to the proscenium.

In the early-1920’s Charlie Chaplin Keystone comedies were screened as part of the variety programme, and D.W. Griffith’s “Birth of a Nation” was screened here. In 1929 it was equipped with a Western Electric(WE) sound system, and began playing week-long runs of films, interspersed with a variety programme. In 1933 it became part of the Moss Empires Theatres chain. Stars who appeared on the stage include George Formby, Gracie Fields, and in the 1940’s Laurel & Hardy, John Boles, Bobby Breen and the Nicholas Brothers.

In the 1950’s and 1960’s, stars such as Frankie Vaughan, David Whitfield, Tommy Steele, Cliff Richard, Helen Shapiro and The Beatles appeared here. In 1960, the Empire Theatre was taken over by the local authority. Later operated by SFX, Live Nation & Clearview Entertainment, it is now part of the Ambassador Theatre Group.

The Sunderland Empire Theatre is a Grade II* Listed building.

The Empire,Sunderland has never been known as the Civic Theatre. It is true that Sunderland Corporation rescued the theatre but the name ‘Empire'was retained.

In Darlington, the ‘Hippodrome’ was taken over by the Town Council and the ‘Town fathers’ , in their ultimate wisdom, had it renamed ‘Civic Theatre’.

I once asked them why they would not reinstate the theatre’s original name as in my – and other people’s – opinion the name ‘Civic’ conjured up an image of a concrete 1960’s edifice rather than the atmospheric Edwardian theatre which it is. Their response was that ‘Hippodrome’ is a ludicrous sounding name – although this view is obviously not held in the major cities of Birmingham and Bristol….

I am sorry to labour the issue of Darlington but I am guessing that the writer has been thinking of that location re theatre renaming…..

A small screen (maybe 100 seats or so) was opened in the Empire building in the 1970’s and was certainly still open in 1985 as I remember attending a screening of Enemy Mine in that year.

The small cinema auditorium with 120 seats opened in

Brett Childes, who, prior to his long spell at

Sunderland Empire,had been the last manager of the

The small cinema occupied an area which had formerly

served as rehearsal rooms. I donated a category board

from the Haymarket Theatre, Newcastle among other

materials, to help him to keep opening costs down as

he had to fight a lot of internal opposition to this

cinema ever seeing the light of day.

Anyway, it did pay its way (as did the main Empire

auditorium between live shows) prior to a young

upstart from The Sands Centre, Carlisle taking over

as Chief Executive in 1997. This character took an

immediate dislike to films playing a part in the

Empire’s remit and closed the Empire Studio (the name

of the small cinema) and sold the screen and

projection equipment in the main theatre.

A brilliant move that turned out to be as very soon

after this executive decision was taken the ABC closed

permanently and the Empire would have had the pick of

the major releases for some time to come given that

the multiplex (aka the Empire – bet that causes some

to ‘the pictures’)did not materialise for a number of